Joining a growing handful of previously declared candidates, New York Senator Kirsten Gillibrand (D-NY) announced that she too would be making a bid for the Democratic Presidential nomination in 2020. Perhaps better known for #MeToo, the recently re-elected Senator has made a name for herself on domestic issues related to military and college campus sexual assault, in addition to Congress’ own sexual harassment problem. However, having been on a Congressional Armed Services Committee since 2007, Gillibrand, whose career began amidst an anti-Iraq War environment, is no stranger to foreign policy issues. At times the Senator has put forward legislation specific to the Gulf region, establishing herself as a leading voice against a nuclear-armed Iran. However, with the Senator’s recent leftward lurch, it remains to be seen if the compromises that typified her early foreign policy attitudes will be maintained as part of her progressive rebranding. 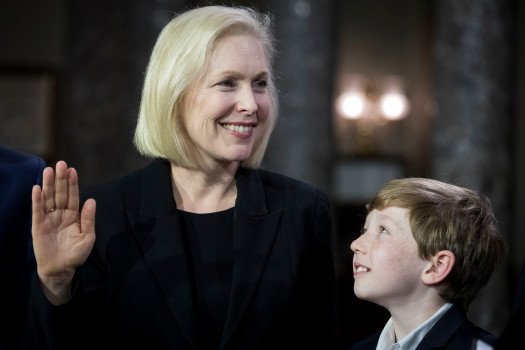 Like many politicians of her generation, it seems that Gillibrand’s career beginnings are unduly tied with the Iraq War. In fact, despite running in a deeply conservative upstate New York district, Gillibrand was convinced that distaste with the war could help swing the electorate in her direction.[1] Gillibrand proved to be correct, and her arrival in Congress at the tail-end of the Bush administration allowed her to vote on several Iraq War funding bills. At the time, Gillibrand was  member of the conservative Blue Dog Coalition and drew criticism from the Progressive wing when she split from the majority of Democrats and voted ‘yay’ on a supplemental Iraq funding bill that did not include the accompanying withdraw timeline that most of the Democratic leadership was demanding.[2] This singular vote sparked a challenge for Gillibrand in the 2008 primaries from a democratic anti-war activist. Gillibrand defended the vote saying, “It’s [a bill] we believe the President will sign…a compromise necessary to prevent funding for troops from running out.”[3]

Gillibrand however was by no means a supporter of the overall war effort. In fact in 2010 when the now-Senator Gillibrand was facing a potentially serious Republican challenge from former Coalition Provisional Authority spokesman Dan Senor, Gillibrand’s camp used Senor’s affiliation with the CPA as one of their primary lines of attack. An aide to Gillibrand even referred to Senor as “George Bush’s chief spin doctor on Iraq.”[4]

The Gulf issue that seems most relevant to the Senator’s Congressional tenure is the threat of a Nuclear Iran. In her statement announcing support for the Iran Nuclear Agreement upon its initial finalization in 2015 Gillibrand commented, “Beginning in 2010, I helped champion in Congress an aggressive and punitive series of sanctions against Iran because we faced an Iranian nuclear program that was spinning unchecked and out of control.”[5] Here, the Senator refers to the ‘Gulf Security and Iran Sanctions Enforcement Act,’ a bill introduced in 2010 of which Gillibrand was the primary sponsor. Although the bill ultimately never made it past the introductory phase, if passed it would have added restrictions to better ensure that the sale of oil produced from the Outer Continental Shelf did not violate the terms of the Iran Sanctions Act of 1996.[6] Understandably, given this history, Gillibrand joined the majority of her colleagues and criticized President Trump for withdrawing from the deal.[7] Additionally, Gillibrand joined most of her fellow Democrats and lamented Saudi Arabia and the American response to the murder of Jamal Khashoggi.[8]

In sum, the potential Gulf oriented policy of a hypothetical Gillibrand administration is likely to be in line with the overall Gulf foreign policy of the Democratic party in general. Still, when it comes to Iran’s Nuclear Program, Gillibrand is certainly not bloviating when she proclaims to have been pushing the issue for quite some time. Additionally, with Gillibrand perhaps being the most prominent politician within the #MeToo movement, it is not unfounded to think that her Gulf policy, and foreign policy in general would have a special emphasis on female empowerment. As far as her chances, most commentators at least mention Gillibrand as a credible candidate, however she has struggled to stand out within the pack. Regardless, with a campaign coffer that is only surpassed by Elizabeth Warren, Gillibrand certainly has the cash to mount an effort that forces the Gulf to take her potential policies seriously.[9]