Hawaii Congresswoman Tulsi Gabbard (HI02) became an early member of what is expected to be a crowded field of candidates gunning for the Democratic nomination in 2020. Although a prominent Democrat, her status as a House member means there will be many hurdles in leapfrogging to the Presidency, a move that has only once been successfully completed by President James Garfield in 1881. Even still, more so than other candidates who will likely throw their hats in the ring, Gabbard brings with her a distinct foreign policy outlook that in recent years has made her familiar with the Gulf region in ways uncharacteristic of a typical House member. A Gabbard Administration may be a longshot in 2021, however her mere presence in the primary has the potential to shape the conversation of Democrat’s foreign policy, particularly toward Saudi Arabia, Yemen, and Iran.

To understand Gabbard’s journey in becoming a stalwart anti-interventionist, look no further than the Congresswoman’s experience as a soldier in Iraq. Gabbard’s National Guard unit was deployed to Iraq from 2004-2005 where she served as a Platoon Leader and Company Commander. Later she was stationed for a year in Kuwait.[1] Despite her service in the war, Gabbard returned to the States and came out against the US invasion saying, “I was against the war in Iraq. We never should have gone there in the first place.”[2] 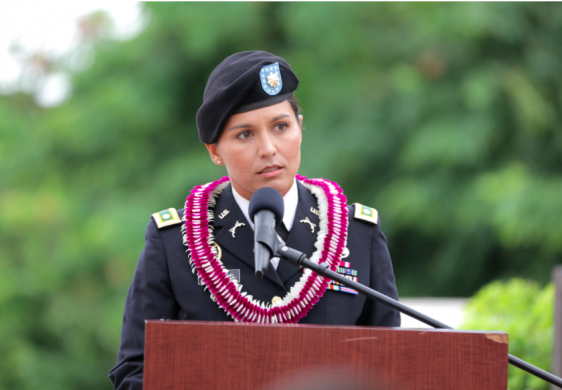 It was her experiences in war that seem to have ignited Gabbard’s drive to avoid American military intervention at all costs. She said of her more hawkish counterparts, “Too often we have found, throughout our country’s history, we have people in positions of power who make offhanded comments about sending a few thousand troops here, fifty thousand there, a hundred thousand there, intervening militarily here, or starting a war there—without seeming to understand or appreciate the cost of war.”[3]

Since then, Gabbard has strongly opposed American assistance to wars in the Gulf Region. The Hawaii Congresswoman has routinely commented and voted against American involvement in Yemen. In late 2018 she criticized outgoing Speaker Paul Ryan for preventing the House of Representatives from invoking the War Powers Act as it relates to Yemen.

In addition, Gabbard has on multiple occasions criticized the Trump Administration for seemingly taking steps that could lead to War with Iran. Gabbard made clear that she interpreted a section of the 2019 National Defense Authorization Act that gives the Secretaries of State & Defense authority to counter “destabilizing activities of Iran,” as too broad of authority that could allow the Administration to circumvent Congress in the event of military action against Iran.[4] 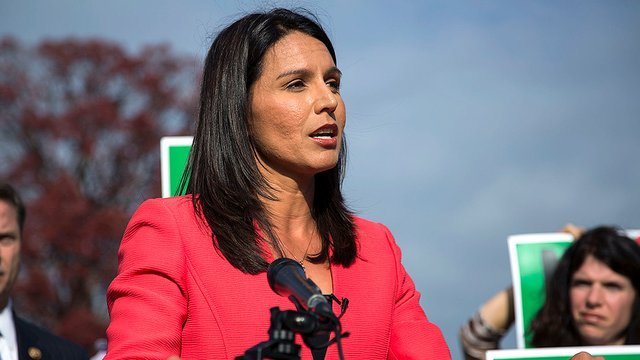 While some Democratic critics of Gabbard are wary of her socially conservative voting record when she served as a member of the Hawaii state legislature, the Congresswoman also cites deployment in Iraq as having shifted her views on religious tolerance and same-sex marriage. When criticizing fellow Democrats for implying a conservative judge’s membership within Catholic fraternity Knights of Columbus raised red-flags, Gabbard lamented, “In Iraq in 2005 I saw candidates for political office labeled according to sectarian religion, with supporters of ‘Shia candidates,’ threatening attacks to the polling centers where supporters of “Sunni candidates,” were casting their votes, and vice versa.”[5] As for issues surrounding gay marriage, Gabbard (who once railed against the agenda of ‘homosexual extremists,”) has since declared that gay-marriage is, “something to be celebrated.”[6] Of this shift, Gabbard too points to Iraq. “It was, she says, the days in the Middle East that taught her the dangers of a theocratic government “imposing its will” on the people. (She tells me that, no, her personal views haven’t changed, but she doesn’t figure it’s her job to do as the Iraqis did and force her own beliefs on others.)[7]

Perhaps the most significant aspect of Gabbard’s Gulf foreign policy is an extreme disdain for the current standing of the US-Saudi Relationship. Gabbard has long been critical of US weapons to the region, a distaste that has grown more pronounced since the murder of Jamal Khashoggi in October 2018. In the aftermath of the murder, Gabbard forcefully declared “Saudi Arabia is not our ally,” and went on to call President Trump a “businessman without a conscious” for offering continued support to Riyadh.[8][9] When President Trump bucked his intelligence officials and refused to publicly hold MbS accountable for Khashoggi’s murder, Gabbard now-famously referred to the President as “Saudi Arabia’s Bi*ch.”[10]

In the months after the Khashoggi case, Gabbard led a much smaller group of elected officials in condemning the Kingdom for the circumstances that led Saudi asylum seeker Rahaf Mohammed Alqunun to flee to Thailand from her allegedly abusive family. In highlighting the story Gabbard referred to Saudi Arabia as a “radical Islamic theocracy,” that “Trump calls our ally.”[11] Still, despite leading Democrats in criticizing Saudi Arabia, the Congresswoman has been highly criticized by members of her own party for having traveled to Syria and taking a meeting with President Bashar al-Assad, a move that raised questions about her overall Middle East policy.

Even if Gabbard is unable to take the Oval Office and implement the stricter terms between USA and Saudi Arabia that she desires, expect Gabbard to force her fellow-candidates to compete with her amidst the Democrat’s leftward shift on foreign policy issues. In this way, even if the Saudi leadership does not view a Gabbard Presidency as a realistic concern, the Congresswoman’s mere presence in the campaign will shift the conversation in a way that is certain to be displeasing to the Kingdom.

[8] “Rep Tulsi Gabbard on MSNBC: Saudi Arabia is Not Our Ally” Votetulsi.com.