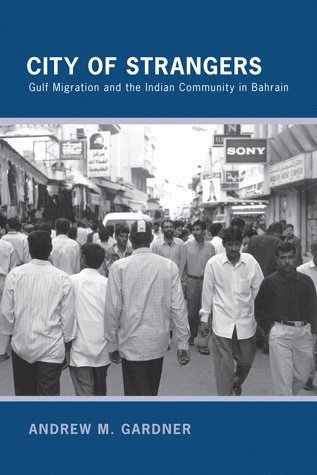 In City of Strangers, Andrew M. Gardner explores the everyday experiences of workers from India who have migrated to the Kingdom of Bahrain. Like all the petroleum-rich states of the Persian Gulf, Bahrain hosts an extraordinarily large population of transmigrant laborers. Guest workers, who make up nearly half of the country’s population, have long labored under a sponsorship system, the kafala, that organizes the flow of migrants from South Asia to the Gulf states and contractually links each laborer to a specific citizen or institution.

In order to remain in Bahrain, the worker is almost entirely dependent on his sponsor’s goodwill. The nature of this relationship, Gardner contends, often leads to exploitation and sometimes violence. Through extensive observation and interviews Gardner focuses on three groups in Bahrain: the unskilled Indian laborers who make up the most substantial portion of the foreign workforce on the island; the country’s entrepreneurial and professional Indian middle class; and Bahraini state and citizenry. He contends that the social segregation and structural violence produced by Bahrain’s kafala system result from a strategic arrangement by which the state insulates citizens from the global and neoliberal flows that, paradoxically, are central to the nation’s intended path to the future.

City of Strangers contributes significantly to our understanding of politics and society among the states of the Arabian Peninsula and of the migrant labor phenomenon that is an increasingly important aspect of globalization.