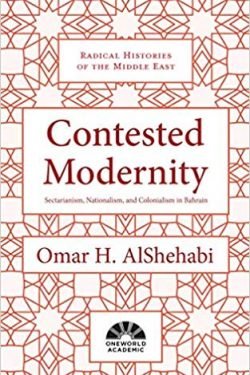 Discussions of the Arab world, particularly the Gulf States, increasingly focus on sectarianism and autocratic rule. These features are often attributed to the dominance of monarchs, Islamists, oil, and ‘ancient hatreds’. To understand their rise, however, one has to turn to a largely forgotten but decisive episode with far-reaching repercussions – Bahrain under British colonial rule in the early twentieth century.

Drawing on a wealth of previously unexamined Arabic literature as well as British archives, Omar AlShehabi details how sectarianism emerged as a modern phenomenon in Bahrain. He shows how absolutist rule was born in the Gulf, under the tutelage of the British Raj, to counter nationalist and anti-colonial movements tied to the al-Nahda renaissance in the wider Arab world. A groundbreaking work, Contested Modernity challenges us to reconsider not only how we see the Gulf but the Middle East as a whole.