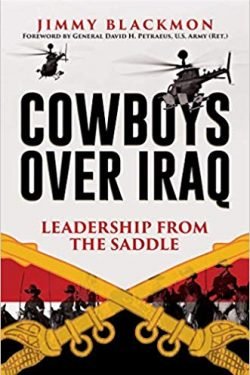 “What does it take to fly and fight with America’s Air Cavalry? That’s the story of Cowboys Over Iraq. You’ll meet bold personalities right out of a Hollywood movie. You’ll be right there as Jimmy Blackmon and his fellow Cavalry troopers track down and tangle with determined foes. You’ll experience the highs of triumph and the lows of bitter loss. Most importantly, you’ll see how and why Jimmy Blackmon learned hard-won leadership and battle lessons in the deadly skies of Iraq. Strap in. Hang on. Get ready to go hunting with the Air Cav.”—Daniel P. Bolger, Lieutenant General, U.S. Army, Retired; Commander, 1st Cavalry Division 2008–2010

“A great read by an exceptional combat aviator, leader, and writer! Jimmy Blackmon captures brilliantly the enthralling story of the air cavalry unit that was the eyes and ears of the 101st Airborne Division (Air Assault) during the fight to Baghdad and throughout the first year in Iraq—when I was privileged to command the division. He captures vividly, as well, the courage, skill, and feel for the battlefield of the gifted pilot and commander of the squadron, Lieutenant Colonel Steve Schiller, to whom we turned repeatedly when the missions were the toughest.”—General David Petraeus (U.S. Army, Ret.); Commanded the 101st Airborne Division (Air Assault), Multinational Force-Iraq, US Central Command, and coalition and U.S. forces in Afghanistan