On July 29, Rep. Brad Schneider (D-IL10) introduced a bill to require a National Intelligence Estimate on Iranian proxy forces. The bill calls for the Director of National Intelligence to produce a report detailing Iran’s support for Hezbollah and other Iranian proxies in the Middle East, also including how these proxies pose a threat to Israel. After the report is completed, the bill requires the President submit a strategy to Congress on how to counter Iranian proxy forces. The bill was referred to the Committee on Intelligence and the Committee on Foreign Affairs.

On July 23, the Senate passed the National Defense Authorization Act for Fiscal Year 2021. The bill allocated $68,340,000 for a naval facility in Bahrain, $26,000,000 for an Air Force facility in Qatar, and $322,500,000 for continued counterterrorism activities in Syria, Iraq, and Iran. Specifically, the bill calls for an assessment of how cyber strategy could play into U.S. campaigns in Iran, the effect of lifting a U.S. arms embargo on Iran, potential Iranian influence in Afghanistan, and Iranian nuclear weapons activity. The bill also requires plans for a timeframe for construction projects in Iraq, a description of how funding will strengthen the U.S.-Iraq relationship, and approval for a number of Qatar-funded construction projects at Al Udeid Air Base in Qatar. Funds from the bill are restricted from going to any entity that partners with Iran for research or technology licensing. The bill was introduced by Senator James Inhofe (R-OK) on June 23 and has now been sent to the House.

On July 21, the House passed a bill to authorize appropriations for the military activities of the Department of Defense in 2021. The bill allocates $68,340,000 for a naval facility in Bahrain and $845,000,000 for equipment to counter ISIS. The bill expresses support for strengthening ties with Qatar and appropriates funds for a series of military construction projects at Al Udeid Air Base. It calls for a report of U.S. weapons sales to Saudi Arabia and the UAE, prohibiting the use of these weapons in the war in Yemen, and calls on Saudi Arabia and the UAE to support reconstruction in Yemen. It requires reports on the war in Yemen and expresses support for peace and resolution efforts. The bill calls for the support of Kurds in Iraq and further cooperation with Iraq to combat terrorism. It also calls for reports on Al-Qaeda members traveling to or from Iran, malign Iranian influence in Afghanistan and Venezuela, Iranian-backed militias in Iraq, Iranian military bases, and Iranian support for the Yemeni Houthis. The bill emphasizes support for Israel in the face of threats from Iran and the importance of keeping cyber and space technology from Iran. It also calls for Kuwait to pay overdue medical debts to the U.S. The bill was introduced in the House by Rep. Adam Smith (D-WA09) on March 26.

The House passed the Department of Defense Appropriations Act for 2021 on July 31. The Act calls for an assessment of connections between terrorist groups and the government of Iran, but makes clear that it in no way authorizes the use of force against Iran. It also appropriates $700 million for countering ISIS in part in Iraq, yet bars funds appropriated by the bill to be used to further involve or permanently station U.S. Armed Forces in Iraq. The Act was introduced in the House by Rep. Peter Visclosky (D-IN01) on July 16.

On July 30, Rep. Adam Schiff (D-CA28) introduced the Intelligence Authorization Act for Fiscal Year 2021 (H.R.7856). The Act requires a report on how to prevent nuclear proliferation in the Middle East and avoid a nuclear arms race between Iran and Saudi Arabia, in addition to reports evaluating any efforts on behalf of Saudi Arabia to develop a nuclear program or promote terrorism. It halts information sharing with Saudi Arabia due to the Saudi government’s role in Jamal Khashoggi’s murder and calls for reports on Saudi human rights abuses in Yemen, specifically evaluating if U.S. weapons have been used to commit these violations. The Act also calls for an intelligence report about potential campaigns by Saudi Arabia, the UAE, or Qatar to influence U.S. politics and policymakers. The Act was referred to the House Committee on Intelligence.

On July 24, the House passed a bill making appropriations for the Department of State and U.S. foreign operations for the next year (H.R.7608). The bill requires a notification process through the Committees on Appropriations for funds to be spent in Bahrain, Iraq, Iran, and Yemen, while strictly prohibiting spending that legitimizes the government of Iran or its proxies in any way. Funds are appropriated for counterterrorism activity and financial assistance in Iraq, including to the Kurdistan Region of Iraq, and no less than $10 million will be set aside for programs promoting accountability for genocide and war crimes in Iraq and Syria. Funding for programs relating to Iran will be determined by accompanying reports on Iran’s nuclear activity and the status and impact of U.S. sanctions on Iran, and funds are appropriated for humanitarian and stabilization aid in Yemen. Lastly, none of the funds for international military education and training can be used as assistance for the government of Saudi Arabia. It was first introduced by Rep. Nita Lowey (D-NY17) on July 13.

On July 27, Senator Lindsey Graham (R-SC) introduced the Restoring Critical Supply Chains and Intellectual Property Act (S.4324) which stipulates that any recipients of money appropriated by the bill will lose their grant money if they work with Iran for any joint research or technology licensing effort. The Act specifically aims to facilitate more domestic production, research, and development of personal protective equipment and semiconductors. The bill was referred to the Committee on Finance.

The Trump administration announced on July 24 that it would bypass Congress in order to approve the sale of large armed drones, which has long been of interest to Saudi Arabia and the UAE. The decision also bypasses the Missile Technology Control Regime, an international agreement formed in 1987 between 35 member states that has been credited with slowing weapons proliferation. Saudi Arabia and the UAE are expected to be among the first buyers of the drones despite considerable Congressional resistance to U.S. arms exports to the two countries, both of which are accused of human rights violations and causing civilian deaths in the war in Yemen. The move also threatens to undermine the Missile Technology Control Regime’s non-proliferation power, which has been limiting global exports of missile technology to Iran. Source: NYT 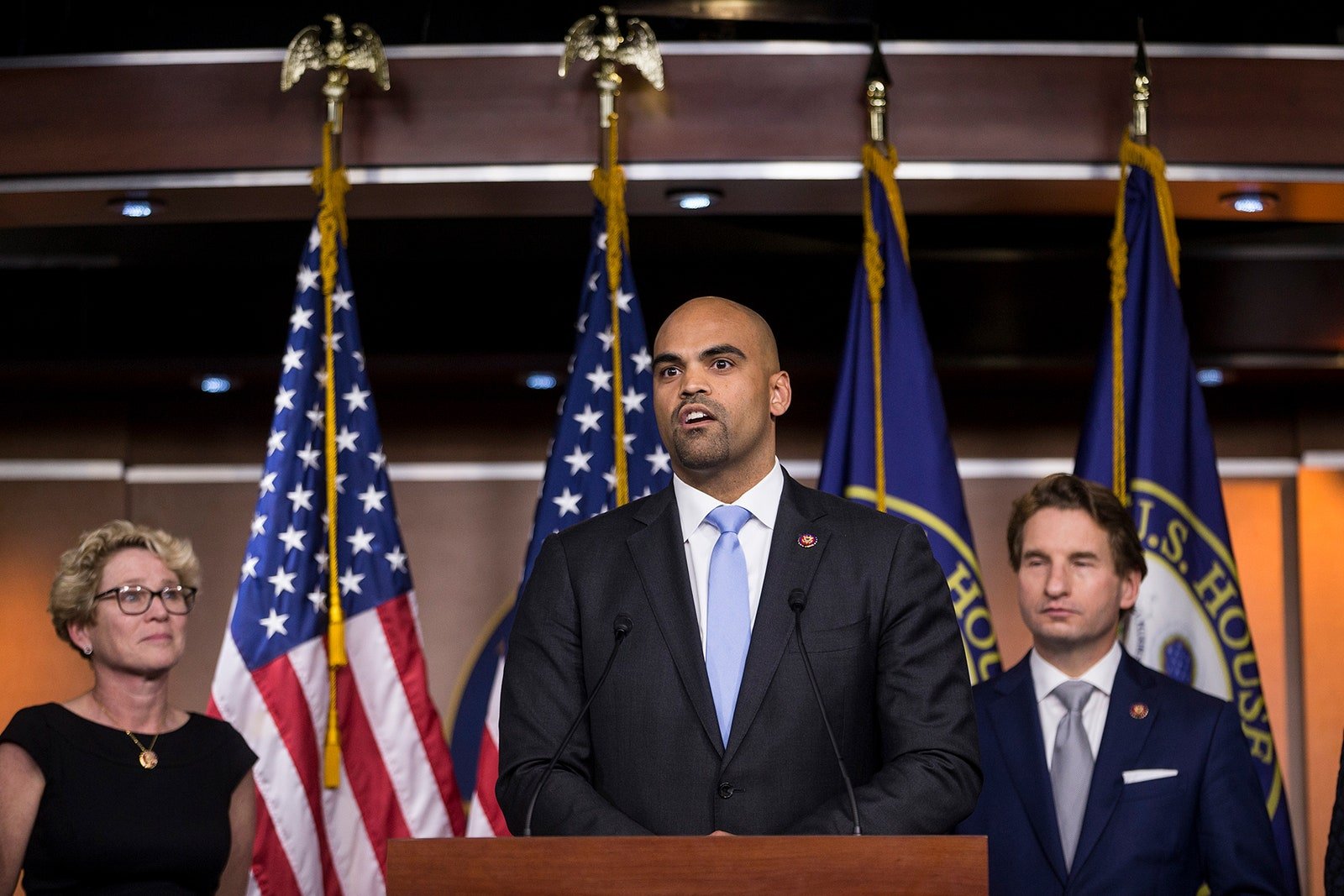 On July 23, Rep. Colin Allred (D-TX32) introduced a resolution affirming the nature and importance of the United States-Iraq bilateral relationship, including security and economic components of the relationship, citing partnership against ISIS and Iran in particular as evidence of the relationship’s importance. The resolution calls on the U.S. to support Iraqi security and sovereignty while continuing to provide humanitarian programs like supporting internally displaced Iraqis and supplying medical aid to combat COVID-19. In turn, it calls for Iraq to protect U.S. diplomats and service members in Iraq and continue the Strategic Dialogues between the two countries. It was referred to the Committee on Foreign Affairs and the Committee on Ways and Means.

Rep. Steve Chabot (R-OH01) introduced H.Res.1061 which condemns the Syrian regime, Iran, and Russia for the war crimes they committed in Idlib, Syria and calls for a political solution to the Syrian civil war. The resolution condemns Iran’s involvement in assisting Syrian forces in an offensive in early 2019 to retake Idlib, stating that the offensive violated the Sochi agreement and caused the worst humanitarian conditions since the beginning of the conflict in 2011. It also condemns war crimes committed by Iran in targeting civilians, hospitals, and schools in Syria. The resolution was introduced and referred to the House Committee on Foreign Affairs on July 22.

On June 25, Rep. Jason Crow (D-CO06) introduced H.R.7343, also referred to as the Afghanistan Partnership and Transparency Act. The Act calls for a report to assess the movements of members of Al-Qaeda and its affiliates between Iran and Afghanistan in addition to other issues, such as the impacts of U.S. withdrawal. The Act was referred to the Committee on Armed Services and Committee on Foreign Affairs.