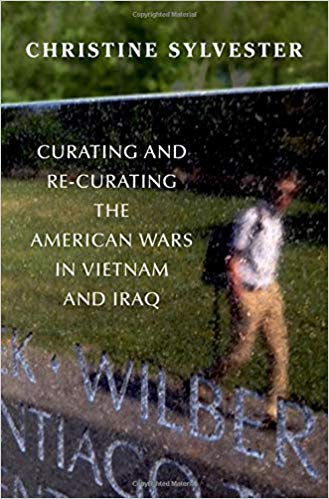 We have long saved–and curated–objects from wars to commemorate the war experience. These objects appear at national museums and memorials and are often mentioned in war novels and memoirs. Through them we institutionalize narratives and memories of national identity, as well as international power and purpose. While people interpret war in different ways, and there is no ultimate authority on the experiences of any war, curators of war objects make different choices about what to display or write about, none of which are entirely problematic, good, or accurate. This book asks whose vantage points on war are made available, and where, for public consumption; it also questions whose war experiences are not represented, are minimized, or ignored in ways that advantage contemporary militarism.

Christine Sylvester looks at four sites of war memory-the National Museum of American History, the Vietnam Veterans Memorial, Arlington National Cemetery, and selected novels and memoirs of the American wars in Vietnam and Iraq-to consider the way war knowledge is embedded in differing sites of memory and display. While the museum shows war aircraft and a laptop computer used by a journalist covering the American war in Iraq, visitors to the Vietnam Memorial or Arlington Cemetery find more prosaic and civilian items on view, such as baby pictures, slices of birthday cake, or even car keys. In addition, memoirs and novels of these wars tend to curate ghastly horrors of wars as experienced by soldiers or civilians. For Sylvester, these sites of war memory and curation provide ways to understand dispersed war authority and interpretation and to consider which sites invite viewers to revere a war and which reflect personal experiences that show the undersides of these wars. Sylvester shows that scholars, policymakers, and other citizens need to consider different types of situated memory and knowledge in order to fully grasp war, rather than idealize it.