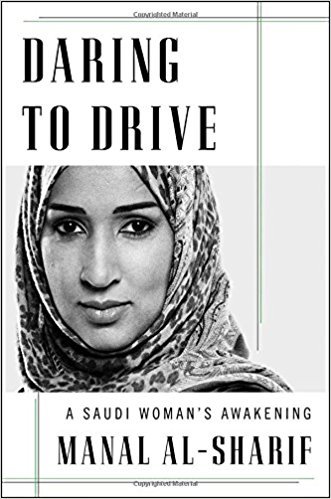 Beset by traffic, smog and other distractions, it’s easy to forget that driving a car is an act of free will, in theory transcending race, class and gender.
Then imagine what life would be like if American women weren’t allowed to drive. Need to go to the hospital? No. Pick up kids after work? No. Visit family or friends? No. The only options are call a driver or wait for a male relative.
Manal Al-Sharif illuminates the insidious nature of that reality in Saudi Arabia. “Daring to Drive” is a brave, extraordinary, heartbreakingly personal story of one woman’s battle for equal rights, told through the minute details of an everyday life that boiled over after years of frustrations.
Al-Sharif was arrested for driving; afterward, people bombarded her with both abuse and praise. The story of her time in a filthy jail is riveting, but “Daring to Drive” does far more than explore that episode and its aftermath.
The book provides a rare glimpse into Saudi society, and especially into the lives and emotions of women. Rules – especially for women – are everywhere, and so are the punishments for breaking them. “Every public and most private spaces were saturated with radical books, brochures, and cassette sermons … (and) these pieces of religious propaganda were overwhelmingly intended to enforce the compliance of women,” she writes. “Taboos included wearing pants, styling one’s hair, and even parting one’s hair on the side – because doing so causes a woman to resemble the infidels.”

Manal al-Sharif’s memoir Daring to Drive opens with a chilling sentence: “The secret police came for me at two in the morning.” Al-Sharif is questioned for hours and then jailed in a filthy, overcrowded women’s prison. Her crime: driving her brother’s Hyundai, because in Saudi Arabia, women do not drive. Without a male guardian, Saudi women can’t rent an apartment, take out a loan, get an ID or register a child for school—and they can never drive, not even to take a sick child to the ER. Saudi religious police enforce a harsh array of laws and customs—women must cover their bodies completely, and unrelated men and women must never mix.
Al-Sharif gives a compelling account of her impoverished, sometimes violent upbringing in Mecca, and of her schooling, where teachers beat students for trivial infractions and religious studies were paramount. She describes the wave of fundamentalist fervor that swept through Saudi Arabia in the late 1970s, imposing increasing limits on women. It is within this rule-bound atmosphere that al-Sharif transforms from fundamentalist teen to a college student studying computer science. She then becomes the first woman in information security at Aramco, the Saudi oil company (originally an American consortium). At Aramco, she interacts with men and lives in Western-style housing. It is her work at Aramco, along with an exchange year in New Hampshire, where she learns to drive and befriends non-Muslims, that leads to her quest to drive in Saudi Arabia and eventually to her calling as a women’s rights activist.
Al-Sharif writes with simplicity, and despite its bleak moments, Daring to Drive moves along quickly. She shares some lovely moments, such as her childhood visits to her rural grandparents, whose lives seemed far freer than her own, and the sports she secretly played in college. She shares her hopeful motto— “the rain begins with a single drop”—which also describes a nation that’s moving forward by the tiniest of increments.