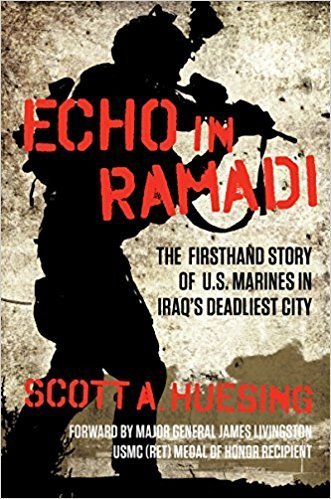 Scott A. Huesing is a retired USMC Infantry Major with over 24 years of service, both enlisted and as a commissioned officer. His career spanned 10 deployments and he conducted operations in over 60 countries worldwide. During his deployments to Iraq, Afghanistan, and the Horn of Africa he planned, led, and conducted hundreds of combat missions under some of the most austere and challenging conditions. He had the privilege to command Echo Company, 2nd Battalion, 4th Marines as part of the 15th Marine Expeditionary Unit (MEU), Special Operations Capable (SOC) while attached to 1-9 Infantry Battalion (“Manchu”), 1st Brigade Combat Team (1 BCT “Ready First”), United States Army (USA) as part of the Surge Strategy in Al Anbar Province, Iraq.

“In war, destruction is everywhere. It eats everything around you. Sometimes it eats at you.” —Major Scott Huesing, Echo Company Commander

For ten brutal months, from the winter of 2006 through the spring of 2007, two-hundred-fifty Marines from Echo Company, Second Battalion, Fourth Marine Regiment fought daily in the dangerous, dense city streets of Ramadi, Iraq during the Multi-National Forces Surge ordered by President George W. Bush. The Marines’ mission: to kill or capture anti-Iraqi forces. Their experience: like being in Hell.

Now Major Scott A. Huesing, the commander who led Echo Company through Ramadi, takes readers back to the streets of Ramadi in a visceral, gripping portrayal of modern urban combat. Bound together by brotherhood, honor, and the horror they faced, Echo’s Marines battled day-to-day on the frontline of a totally different kind of war, without rules, built on chaos. In Echo in Ramadi, Huesing brings these resilient, resolute young men to life and shows how the savagery of urban combat left indelible scars on their bodies, psyches, and souls. Like war classics We Were Soldiers, The Yellow Birds, and Generation Kill, Echo in Ramadi is an unforgettable capsule of one company’s experience of war that will leave readers stunned.