From February 12-14, 2018, Kuwait hosted an international conference to help Iraq with reconstruction. At the conference, held in the Kuwaiti capital, Baghdad sought $88 billion from donors to rebuild areas destroyed during the war on Islamic State (IS). According to Iraq’s government, there are 70,000 destroyed houses and 140,000 partially destroyed. Donors’ response was disappointing, and they pledged to support Iraq with $30 billion in loans, credit, or direct investments, which was far less than Baghdad’s request. Donors feared the failure of reconstruction plans and in the first day they only offered $300 million of the $88 billion requested by Baghdad. Their reluctance was linked to the failure of post-2003 reconstruction efforts because of massive waste and corruption.[1]

Turkey made the biggest pledge with $5 billion, followed by the US at $3 billion, Kuwait at $2 billion, Saudi Arabia at $1.5 billion, Qatar at $1 billion, Germany at $615 million, and the United Arab Emirates (UAE) at $500 million.

During the conference, Baghdad understood that to receive support from donors, Iraq must have a transparent budget for the reconstruction process and involve civil society organizations. Baghdad also understood the need to adopt a comprehensive reform strategy in the reconstruction plans and make political and social reforms to drive strategy. The international community urged Baghdad to make the rebuilding of the country an inclusive process, involving all previously marginalized sects and tribes in both Iraq’s political process and the war-torn country’s development programs. In other words, Iraq’s reconstruction plan should be primarily designed to achieve social reconciliation by restoring peaceful coexistence and economic capacities that were destroyed by political prejudice, terrorism, and displacement. Therefore, Baghdad should create necessary conditions for building an effective strong society harmonized with government apparatuses to avoid future conflicts.

Ultimately, the aim is to heal the division of Iraqi society that led to IS’ rise to power, the destruction of three provinces, and internal displacement for nearly three million Iraqis. Overall, the reconstruction should not be treated as a technical process, but rather as a plan fully linked to the nature and motives of the conflict. The process should also consider the political situation post-conflict, mainly that the conflict resulted from the rise of new powers (particularly paramilitary groups) and the demise of old powers (the tribal system that previously helped maintain peace). 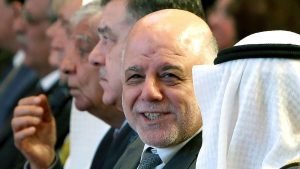 On the other hand, there are two factors which might help Iraq obtain more donor support. First, Iraqi Prime Minister Haider Al-Abadi is viewed more determined to end the root-cause of the conflict than his predecessors. Since he came to power in September 2014, al-Abadi recognized that political injustices and the authoritarian nature of Iraq’s Iranian-backed sectarian government in Baghdad as the reasons for IS’ ascension to power in mid-2014. In 2017 and 2018, Iraq strengthened relations with Saudi Arabia, Kuwait, and Qatar, which in part was reflected in the $5 billion aid and investments promised by the Saudis, Kuwaitis, and Qataris at the conference. This was illustrative of the GCC states’ determination to increase their role in Iraq and weaken Iran’s influence in the country, which al-Abadi has challenged several times. Second, government officials across the West see durable peace in Iraq and eliminating all reasons for the reemergence of ISIS as advancing their countries’ vital national security interests. The US and EU spent billions of dollars in military aid and operations in the war on IS. Also, Europe faced the worst refugee crisis in decades as civilians fled the conflict-plagued parts of Iraq and other Arab countries such as Syria and Libya, which fueled a crisis for security officials across Europe. Ideally, more in the international community of donors will recognize the high stakes in Iraq’s reconstruction and build on the conference in Kuwait City as a starting point for making major investments in the war-torn country’s future.