As Iraqi Prime Minister Haidar Al Abadi heads into a crucial election in May he finds himself in a challenging but in some ways potentially advantageous situation as Iran and Saudi Arabia, jostling for regional hegemony, continue to ratchet up the rhetoric against each other. Al Abadi’s willingness to leverage increasing Saudi-Iranian tensions may well pay off at the polls next month, if he can pull off what is a delicate balancing act.

The prime minister, while much indebted to Iran, is using the opportunity of an ongoing rapprochement with Saudi Arabia to cautiously wean Iraq away from what has been characterized as an over-reliance on Tehran. The rapprochement, which began after the ascendancy to the throne of Saudi King Salman in 2015, reached something of a startling apogee when the king’s powerful son and crown prince Mohammed Bin Salman(MbS) met with Moqtada Al Sadr, the Iraqi Shia cleric, politician and militia commander in late July of last year. 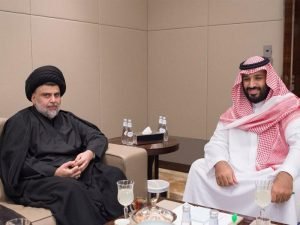 The photograph of the two with MbS smiling comfortably and Sheikh Al Sadr staring at the camera with a degree of apprehension was a clear statement of intent by the Saudis that they were prepared to put sectarian disputes aside as part of a broader soft power approach, at least as far as Iraq was concerned. The sheikh’s political rival Al Abadi had already met King Salman at a regional economic conference in Jeddah in June 2017. A second meeting between the prime minister and the king took place in October. In the interim, Iraq and Saudi Arabia reopened Arar, a long-closed border crossing between the two nations. Additionally, the two countries resumed flights between Baghdad and Riyadh that had been suspended for 27 years.

If this was unsettling to the Iranians, they showed no public face of concern, perhaps because they feel comfortable with the extent to which they already dominate Iraq through a military, economic and political presence that had blossomed when Haidar Al Abadi’s predecessor, Nouri Al Maliki, was prime minister. Al Maliki’s divisive sectarian politics had angered and alienated Iraqi Sunnis and it proved disastrous for the country. He advanced the interests of a wealthy Shia elite through a program of blatant corruption thereby helping to create the fertile ground in which ISIS was able to flourish with devastating impact.

At the same time, the Al Maliki administration enabled the Iranians to further entrench their position. However, many Iraqis, including the followers of Moqtada Al Sadr who number in the millions, resented the way in which Iran had come to play a dominant role in a country whose leaders allowed a privileged few to flourish while the vast majority, be they Shia or Sunni, remained deeply impoverished.

Having previously made a name for himself by leading the Mahdi Army militia’s fight against the U.S., Sheikh Al Sadr has rebranded himself as a nationalist politician, willing to fight corruption and foreign intervention regardless of its source. His meeting with MbS emphasized just how far he is prepared to go in order to send a strong message that Iraq is not simply Iran’s for the taking.

In light of Sheikh Al Sadr’s recent actions, it is now up to Prime Minister Al Abadi to incorporate the Moqtada strategy into his own reelection efforts. However, he must be sure not to  yield too much ground to his political rival, who just last year ordered his supporters to storm the parliament in Baghdad in protest at what  he views as an irredeemably corrupt and illegitimate Al Abadi government.

Perhaps motivating the prime minister is the tantalizing prospect of massive Saudi investment in order to facilitate reconstruction of his war-ravaged country. Al Abadi has estimated that the rebuilding task will cost anywhere from $45 billion to $100 billion. At this point, reconstruction pledges stand at roughly $30 billion, with the Saudis having committed to just $1.5 billion of that amount. That commitment could increase dramatically if MbS senses there are real gains to be made at the expense of the Iranians who have found themselves financially stretched within their own borders, largely due to the nation’s foreign adventures in the region and especially in Syria.

Even if they could afford to, it is unlikely that the Iranians would strive to match the Saudis. A rolling series of protests that swept through Iranian cities in December and January showed the depth of anger at the amount of money Tehran was spending on military efforts abroad while Iranians at home suffer from high rates of unemployment and inflation. Unsurprisingly, given their economic vulnerability, the Iranians are anxious, too, to protect their substantial export business to Iraq, amounting to some $13 billion in 2017. That in itself could serve as a large motivation to accept a new status quo should the Saudis decide to invest heavily in Iraq’s rebuilding project.

As he seeks to win re-election, this is an opportunity that Haidar Al Abadi may well strive to exploit.  Still, in the highly fractious environment of Iraqi politics he has a fine line to walk. He needs to carefully encourage the Saudis without angering Iran. All the while he is being watched by Moqtada Al Sadr, a potent political rival who at any moment, with an appeal to nationalist sentiment, can call millions into the streets should he decide that the prime minister has veered too closely to one side or the other.