Exactly eight years since Arab Spring protestors first forced the deposition of four Middle Eastern dictators, a recent redux appears to be occurring, with protestors taking to the streets in Algeria and Sudan calling for change. Only a few days after Algeria’s President Abdelaziz Bouteflika announced his resignation, Sudanese President Omar Al-Bashir was removed from his position by the very military that had previously propelled him to power. This new status quo will inevitably impact Gulf state interests, especially in Sudan where President Al-Bashir’s foreign policy was highly linked to those of certain nations in the Gulf. In the case of Sudan, the nations of Saudi Arabia (KSA), the United Arab Emirates (UAE), and Qatar each have a clear interest in checking Sudan’s stability, and will likely work to ensure that Al-Bashir’s replacement is a trusted ally. However, such a goal may be challenging since the Sudanese political environment has not yet produced an obvious replacement.  Given the chaotic changes currently taking place in Sudan, continued delays in settling on a new ruler may jeopardize the very Gulf interests that were so carefully cultivated with Al-Bashir. Therefore, because of the vagueness of the current power struggle in Sudan that almost necessarily invites the influence of regional and international powers, and although Gulf states share strategic interests in Sudan, their conflicting agendas will probably turn the African nation into yet another site of a proxy conflict. 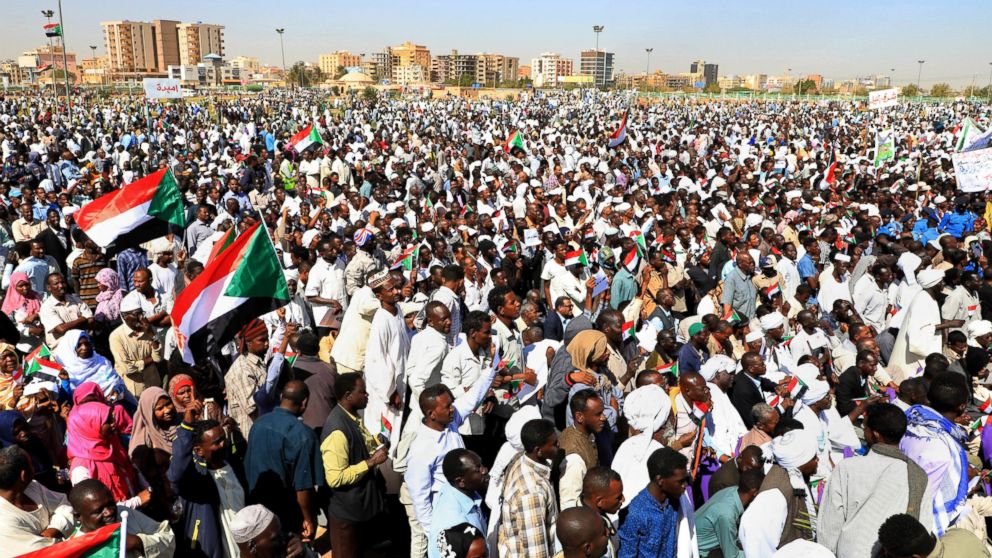 Lessons from previous Arab Spring movements taught Sudanese protestors the valuable lesson that the removal of a long-standing head of state has the potential to bring about military dictatorship, or rule by Islamists. In either case, external powers’ (including some Gulf states) have sought and will continue to seek policies of interference amidst these nations during periods of uncertainty. Immediately after the military announced Al-Bashir’s removal, protestors, opposition leaders and workers’ associations continued pressure to exclude military involvement from the transitional period, as well as secure the establishment of a civilian cabinet. Such a goal has put pressure on the governing National Congress Party (NCP) and the military leadership, as both are working to secure a major role in Sudan’s future. Due to a longstanding and close relationship with the NCP’s and the Sudanese military’s de facto absolute leader, Al-Bashir, the two institutions have been made allies of Qatar, Saudi Arabia and the UAE. However, in the wake of Al-Bashir’s removal, under the pressure of the opposition, the military has retreated from previous attempts at grabbing power, all while the defection of assumed Al-Bashir allies to the cause of the protestors has left confusion as to the nation’s way forward.

Considering this uncertainty, it remains a possibility that Al-Bashir’s removal will transform Sudan into yet another theatre of Gulf rivalry. The former President’s strong investment in relations with the now-feuding Doha, Riyadh and Abu Dhabi (and his hands-off approach to conflicts among them) has perhaps left each of these nations assuming they retain the right to influence Sudan’s revival. Al-Bashir had perfected his ability to seamlessly traverse the Middle Eastern political spectrum, shifting by necessity from presenting himself as an army leader with a complete control over Sudan’s military, to that of a leader that could speak to movements inspired by political Islam. This dichotomy was a rare melding of two ideologies naturally opposed in the Arab world, each of which is backed by the two rival axes of GCC politics. His ability to survive two civil wars, the first of which resulted in the 21st century’s first genocide, and the second with the emergence of South Sudan, by adapting his alliances to secure the continuation of his rule partly enabled him to be a simultaneous ally to Tehran, Doha, Abu Dhabi and Riyadh. This delicate balance was not only displayed in his immediate Arab-African geopolitical environment, but also spoke to a divide deeply rooted in the Gulf region. Through his foreign policy, President Al-Bashir made Sudan an ally to Iran (until relations were broke in 2016[1]) and a strategic partner to both the UAE and Saudi Arabia by committing troops to the Saudi-led Arab Collation in Yemen. Qatar, on the other hand, cemented itself as a strategic partner of Sudan after Doha brokered the Darfur peace deal, successfully ending one of the bloodiest chapters in the African continent’s history of civil war, while heavily relying on economic assistance from the three rich Gulf countries. In 2018 Al-Bashir took Sudan into another dimension when he allowed for a Turkish presence at its Red Sea ports, a move that could be seen as threat to Saudi-Egyptian dominance over the critical waterway.[2] 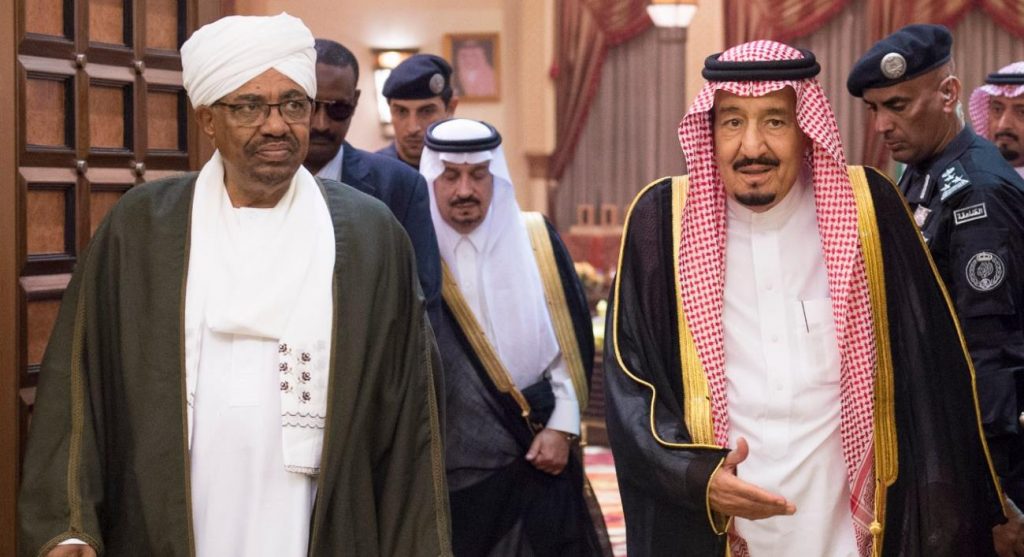 Among the Gulf states, Saudi Arabia and the UAE could be the most concerned about the ongoing turbulence in Sudan, as it could jeopardize the poor state’s participation in the Yemen War. Simultaneous with its expressions of support, Saudi Arabia and the UAE announced a $3 billion aid package destined for Khartoum to include medical supplies, wheat, and petroleum products, including $500 million deposit for the Sudanese central bank.[3] A few days later a delegation from the UAE and Saudi Arabia visited Khartoum and met the TMC.[4] The first signs of a possible struggle for a role in post-Bashir Sudan came when traditional allies to Al-Bashir (Qatar, UAE and Saudi Arabia) released statements concerning the situation in Sudan. This contrasts with the majority of the Arab states which limited their statements to a minimum acknowledgment in the wake of uncertainty coming from Khartoum’s decision-making centers. Iraqi officials refrained from commenting on the removal of Al-Bashir. The only semi-official comment came from the head of Iraq’s biggest parliamentary bloc, the Shiite cleric Muqtada Al-Sadr who in a tweet hailed the protestors’ power to remove dictators in Sudan and Algeria. Iran’s only comment came from a Foreign Ministry spokesperson who called the removal of Al-Bashir an internal affair and urged the Sudanese to commit to national unity and return to dialogue.[5] A similar comment from Kuwait and Qatar also called for national unity, urging the international community to not interfere in Sudan’s sovereignty without going into details of the current power struggle in Sudan. As expected, Bahrain followed suit of KSA and UAE, expressing clear support for the transitional military council.

For both Riyadh and Abu Dhabi, the stability of Sudan and the continuation of their respective alliances with Khartoum is strategically important for each nation. Both states will probably see any major shift in Khartoum’s foreign policies as jeopardizing to the stability of their major ally, Egyptian President Abdelfattah El-Sisi. It is no state-secret that Egypt views Sudan as a natural ally due to both their geographic proximity, as well as cooperation on sharing the water and agricultural resources provided by the Nile river. Therefore, any radical change in Khartoum, (mainly concerning the role of its army or political status quo) might be viewed as an emerging risk to the rule of an increasingly challenged Sisi. Equally important is the former Sudanese President’s alliance with Doha and Turkey, who might push for a lesser role of the military as evidenced when Ankara called for the military to commence a coup against Al-Bashir.[6]

The national interests of the Arab Gulf states and their possible intervention in another ‘Arab Spring case’ are once-again in discussion. The fact that a president who survived two civil wars was eventually ousted by protestors might make Gulf states more cautious about crafting their alliances, and possibly their infighting since the region seems to once again be witnessing fast-moving changes. This fact could be one of the drives behind the Gulf rivals’ decision to see protestor-induced transformation as the lesser of two evils, especially given the financial difficulties and uncertainty that would have resulted from intervention. Yet, considering the high stakes, the Gulf will respond as necessary in order to prevent another regional or international power from controlling Sudan’s future.