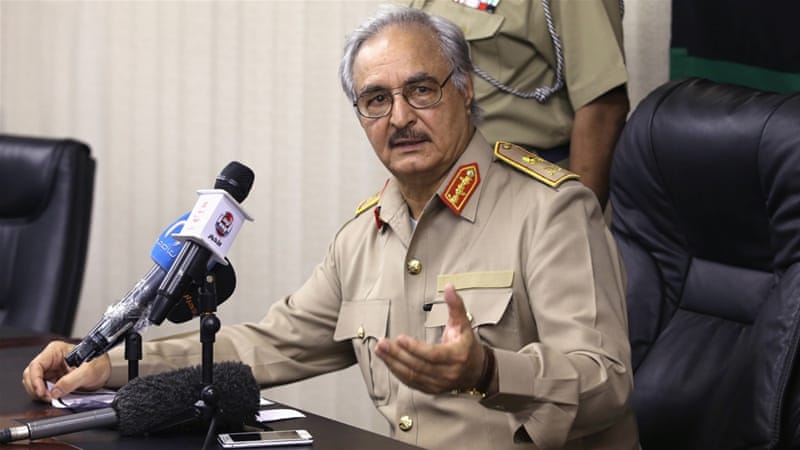 Human rights groups in Libya have accused the United Arab Emirates of committing war crimes in the country, including killing hundreds of civilians.

The rights groups said on Tuesday that the UAE committed these crimes through direct air strikes on Libya and by the renegade general Khalifa Haftar.

The findings of alleged crimes were presented on Tuesday at a conference for human rights on the sidelines of a Human Rights Council meeting in Geneva, Switzerland.

At the forum, Libyan witnesses spoke of extrajudicial killings, forced hunger and displacement that they or their family members experienced under Haftar in Derna and Ganfouda, provinces in eastern Libya.

Abdulghani Aljatlaw, head of a group of families of survivors, also spoke about alleged UAE air raids in the Libyan capital Tripoli in August 2014.

Giumma El-Omami, president of Human Rights Solidarity, said that a UN commission set up by the Security Council found evidence of human loss that resulted from UAE and Egyptian air strikes on Libya.

Meanwhile, the independent body for investigating the UN has asked the Swiss police to arrest the coordinator of an Emirati association that was involved in alleged bribery and money laundering within Switzerland.

The independent body, along with Swiss human rights activists, accused two organisations, the Arabic Federation for Human Rights and Trends for Research and Consultancy, of working for the benefit of the UAE, offering bribes within Swiss border, and within UN buildings.

Allegations of abuses against Haftar comes as he met Italy’s defence minister and security chiefs in Rome on Tuesday, bolstering his stature as a key player in international efforts to stabilise his troubled country.

Forces under Haftar’s command provide backing for a Tobruk-based administration that controls much of the east and south of the oil and gas-rich country.

Former colonial power Italy has hitherto been the strongest backer among Western allies for the UN-recognised Government of National Accord, which is based in Tripoli and sees Haftar as an arch foe.

But that did not prevent Roberta Pinotti, Italy’s defence minister, from hosting the commander, a one-time ally and later armed opponent of Libya’s late ruler Muammar Gaddafi.

“The stabilisation of Libya, the fight against international terrorism and the control of migration flows figured during the meeting,” the defence ministry said.