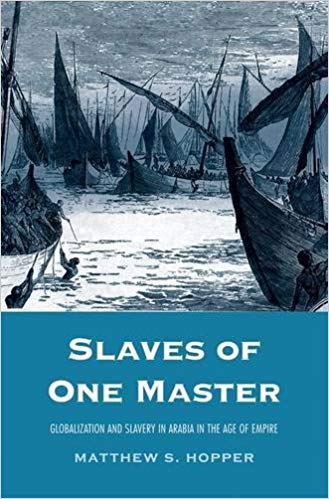 In this wide-ranging history of the African diaspora and slavery in Arabia in the nineteenth and early twentieth centuries, Matthew S. Hopper examines the interconnected themes of enslavement, globalization, and empire and challenges previously held conventions regarding Middle Eastern slavery and British imperialism. Whereas conventional historiography regards the Indian Ocean slave trade as fundamentally different from its Atlantic counterpart, Hopper’s study argues that both systems were influenced by global economic forces. The author goes on to dispute the triumphalist antislavery narrative that attributes the end of the slave trade between East Africa and the Persian Gulf to the efforts of the British Royal Navy, arguing instead that Great Britain allowed the inhuman practice to continue because it was vital to the Gulf economy and therefore vital to British interests in the region.

Hopper’s book links the personal stories of enslaved Africans to the impersonal global commodity chains their labor enabled, demonstrating how the growing demand for workers created by a global demand for Persian Gulf products compelled the enslavement of these people and their transportation to eastern Arabia. His provocative and deeply researched history fills a salient gap in the literature on the African diaspora.