From The Guardian, October 9, 2017, by Saeed Kamali Dehghan 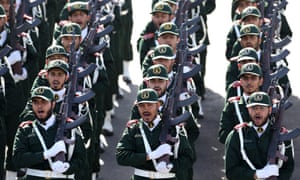 In the 11 months since Donald Trump’s election, Tehran has been at pains to avoid kneejerk reactions. In a country of a thousand Friday prayer podiums, the measured responses to the US president’s pronouncements on Iranian activities have revealed much effort behind the scenes to grapple with changed circumstances.

But Tehran’s response this week to reports that the US is working to designate the Revolutionary Guards a terrorist group is an indication that there is a limit to its patience. It is also ratcheting up tensions in an already tense week, which could lead to the undoing of the 2015 nuclear deal.

Trump faces a congressional deadline of the end of this week to certify Tehran’s compliance under the agreement. He has threatened to decertify it, which could unravel the accord despite the wishes of Washington’s European allies, the majority of the international community and the US military.

There is uncertainty over the extent to which the president will go to show his disdain for the agreement, which was a major foreign policy achievement of the Obama administration. Trump could announce some symbolic new sanctions or restore nuclear-related sanctions in blatant violation of the agreement.

But one threat has sparked jitters. The Iranian foreign ministry has said the Islamic Republic will show a crushing response should the US list the Revolutionary Guards as a terrorist entity. Although the elite forces have been accused of supporting groups such as Hamas and Hezbollah, they have so far been spared being labelled a terrorist group.

“We are hopeful that the US does not make this strategic mistake,” Bahram Qasemi, the ministry’s spoksman, said in quotes carried by the state news agency Irna. “If they do, Iran’s reaction would be firm, decisive and crushing, and the US should bear all its consequences.”

The previous day, state media in Iran reported the head of the Revolutionary Guards threatening the US regional military bases if it was designated a terrorist group.

“As we’ve announced in the past, if America’s new law for sanctions is passed, this country will have to move their regional bases outside the 2,000km range of Iran’s missiles,” Maj Gen Mohammad Ali Jafari was quoted as saying.

The European Union has made it clear that it fully supports the nuclear deal, and the International Atomic Energy Agency has confirmed eight times that Tehran is complying with it. Angela Merkel, the German chancellor, has even suggested the agreement should serve as a model to resolve the North Korean crisis. Theresa May, the British prime minister, told her Israeli counterpart, Benjamin Netanyahu, on Monday that the UK remained firmly committed to the deal and believed it was vitally important for regional security.

Andrew Keller, a former deputy assistant secretary of state for sanctions and counter threat finance, told the Guardian that Trump’s decertification of the deal would be an own goal, and designating the Guards as a terrorist group would be futile and detrimental to the agreement.

“It could lead to the unravelling of the deal at a time when Iran is reportedly complying and more and more businesses are engaging as a result of sanctions relief. In other words, the deal is working as we intended it to work. Sanctions may not ultimately be reimposed, but decertification will destabilise the deal for governments and businesses alike,” he said.

“The IRGC [the Guards] is already subject to multiple US sanctions. Piling on another terrorist designation seems unlikely to stop any IRGC activity, but it will add to the compliance challenges facing businesses engaging in Iran.”

Richard Dalton, a former British ambassador to Tehran, said designating the Guards a terrorist group would be a major escalation. “Iran has always been reluctant to butt up against the US because they know they can’t beat America by far so it’s difficult to know how much of [their recent reaction] is bluster and how much is real,” he said. “I don’t think the Iranians want to get into a shooting war with the US, even a skirmish in Iraq or Syria.”

Dalton said Trump seemed intent on getting to “deal with Iran as a bad actor”, which would translate to “a package of sanctions recommended to Congress, a diplomatic offensive with allies, a statement of policy on missiles or sunset clauses or military site inspections – perhaps linked to extra sanctions, further discouragement of non-US businesses (nixing Airbus along with Boeing [deals with Iran]) and reinforcing EU banks’ concern”.

According to Dalton, ditching the Iran deal would make it impossible to continue to monitor Iran’s nuclear programme “so thoroughly” and “risks setting the United States on a path of conflict with Iran at the time when the US and the world already have one nuclear crisis in the shape of North Korea.

“It’s weakening America by causing people to question America’s fidelity to its words and its ability to perceive where its interest lies,” he said.

“The chilling effect was very real from November 2016 onwards. There are many uncertainties: will the US impose secondary sanctions on countries that buy Iran’s oil? Will they move the clock back in a way which reinstates nuclear-related sanctions lifted in January 2016 or will they simply confine themselves to additional measures that are non-nuclear in nature? How Trump approaches this and how Congress responds is still uncertain and consequently exactly what the Europeans’ reaction will be.”

LONDON (Reuters) – Iran promised on Monday to give a “crushing” response if the United States designated its elite Revolutionary Guards as a terrorist group.

The pledge came a week before President Donald Trump announces a final decision on how he wants to contain the Islamic Republic.

He is expected on Oct. 15 to “decertify” a landmark 2015 international deal to curb Iran’s nuclear program, a step that by itself stops short of pulling out of the agreement but gives Congress 60 days to decide whether to reimpose sanctions.

Trump is also expected to designate Iran’s most powerful security force, the Islamic Revolutionary Guards Corp (IRGC) as a terrorist organization, as he rolls out a broader, more hawkish U.S. strategy on Iran.

“We are hopeful that the United States does not make this strategic mistake,” Foreign Ministry spokesman Bahram Qasemi was quoted as saying by the state news agency IRNA.

“If they do, Iran’s reaction would be firm, decisive and crushing and the United States should bear all its consequences,” he told a news conference reported by IRNA.

Individuals and entities associated with the IRGC are already on the U.S. list of foreign terrorist organizations, but the organization as a whole is not.

Jafari also said that additional sanctions would end chances for future dialogue with the United States and that the Americans would have to move their regional bases outside the 2,000 km (1,250 mile) range of IRGC’s missiles.

U.S. sanctions on the IRGC could affect conflicts in Iraq and Syria, where Tehran and Washington both support warring parties that oppose the Islamic State militant group (IS).

France said on Monday it was worried that classifying the IRGC as a terrorist group could exacerbate tensions in the region.

Germany said it was worried Trump would decide Iran is not respecting the nuclear deal, negotiated under his predecessor Barack Obama, and fears such a step will worsen insecurity in the Middle East.

A U.S. pullout could unravel an accord seen by supporters as vital to preventing a Middle East arms race and tamping down regional tensions, since it limits Iran’s ability to enrich uranium for nuclear fuel in exchange for the lifting of sanctions that damaged its oil-based economy.

The U.N. nuclear watchdog’s inspectors have repeatedly declared Iran in compliance with the terms of the nuclear deal.

Trump called Iran “a corrupt dictatorship” during his first speech to the U.N. General Assembly and said the nuclear deal was “the worst and most one-sided transactions the United States has ever entered into”.

The other five world powers in the deal were Britain, France, Germany, Russia and China.

The prospect of the United States reneging on the agreement has worried other partners that helped negotiate it.

The Kremlin said that any U.S. withdrawal from the nuclear deal would have “negative consequences.”

British Prime Minister Theresa May, who supports the nuclear pact, and Israeli Prime Minister Benjamin Netanyahu, who opposes it, agreed in a phone call on Monday that they need to be “clear-eyed” about the threat Iran poses to the Middle East.

“They agreed that … the international community should continue working together to push back against Iran’s destabilizing regional activity,” May’s spokesman said.

Despite the nuclear deal, Washington still maintains its own more limited sanctions on Iran over its ballistic missile program and over accusations Tehran supports terrorism.

Iran says it is developing missiles solely for defensive purposes and denies involvement in terrorism.

The Trump administration aims to put more pressure on the IRGC, especially over recent missile tests and what Washington has called its “malign activities” across the Middle East.

The U.S. government imposed sanctions in July on 18 entities and people for supporting the IRGC in developing drones and military equipment. In August, Congress overwhelmingly approved the “Countering America’s Adversaries Through Sanctions Act” which imposed new sanctions on Iran for its ballistic missile program, as well as sanctions on Russia and North Korea.

In an interview aired on Saturday night, Trump accused Iran of “funding North Korea” and “doing things with North Korea that are totally inappropriate”.

Qasemi, Iran’s foreign ministry spokesman, said the U.S. accusations were “baseless”. He added, “Israel and some specific countries are raising these accusations to create Iranophobia.”