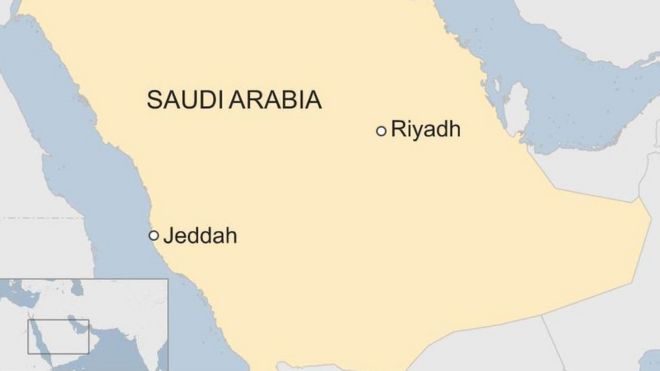 A shooting at a royal palace in Saudi Arabia has left two security guards dead and three others injured, according to state media.

A Saudi interior ministry statement said a 28-year-old man was killed after he drove up to the Al Salam palace gates in Jeddah and shot at security.

The man was named as Mansour al-Amri, a Saudi national.

The US embassy had earlier warned citizens after unconfirmed reports on Saturday of an attack in the area.

Several news outlets are reporting an attack against Al-Salam Palace today in Jeddah. The Palace is located next to the King Abdulaziz Road/Andalus Road. Due to the possibility of ongoing police…

“Due to the possibility of ongoing police activity, American citizens are advised to exercise caution when travelling through the area,” the embassy said in a brief statement.

Security guards stopped the attack and killed the gunman.

No further information about the attack or the gunman’s motive is known.

The drills of “Kaseh 1” exercise between the Saudi Royal Land Forces and its counterpart in the Pakistani army concluded on Thursday, reported the Saudi Press Agency (SPA) .

The exercise’s commander from the Saudi side, Brigadier General Abdullah Manna Al-Amri, said that the “Kaseh 1” exercise was carried out to enhance the efficiency of engineers in unconventional warfare for both sides and to unify the concepts and fighting operations that come within framework of the friendly relations and military cooperation between the Saudi forces and the Pakistani army.

For his part, Commander of Corps of Engineers in Pakistan Army, Major General Mohammad Ajmal expressed his pride in participating in the exercise and said: “the Kingdom Saudi Arabia is our second home and we consider the Saudis as our brothers,” noting that the Pakistani army has taken successful steps in the fight against terrorism.

Abu Dhabi will also no longer grant North Korean companies authorisation to work in any of the seven emirates.

The UAE on Thursday announced it had stopped issuing visas to North Korean nationals and terminated diplomatic relations with Pyongyang.

Abu Dhabi will also no longer grant North Korean companies authorisation to work in any of the seven emirates. Tensions over North Korea’s weapons programme have soared in recent months.

Qatar’s ex-Deputy Prime Minister has revealed details of a plan funded by the UAE to invade his country using mercenaries from the American security service company formerly known as Blackwater. Abdullah Bin Hamas Al-Attiyah noted that the plan still hasn’t received the green light from Washington.

Al-Attiyah told Spain’s ABC newspaper that thousands of mercenaries from Blackwater — now called Academi — are undergoing training in the UAE. “Plans for the invasion led by the Emirati authorities were underway before the announcement of the economic and diplomatic siege on Qatar by Saudi Arabia, Egypt, the UAE and Bahrain [on 5 June, 2017],” he explained.

According to the Spanish newspaper, the White House was supposed to approve the plan, but it did not get the final “green light” from US President Donald Trump. There was no immediate comment from the UAE regarding the accusation.

Huff Post newspaper quoted unnamed official sources saying that the foreign mercenaries are being training in the Emirati military base in Liwa. The same sources also noted that Blackwater has trained 15,000 other mercenaries, mostly from Colombia and South America.

The Abu Dhabi government is believed to have used Blackwater’s services in its operations in Yemen as part of the Riyadh-led Coalition against the Houthi rebels. Over the summer, the mercenaries apparently suffered numerous military setbacks in Yemen, prompting them to abandon their positions.

Blackwater decided to change its name due to several reports in the international press about abuses committed by its “contractors”, especially during and after the US-led invasion of Iraq.