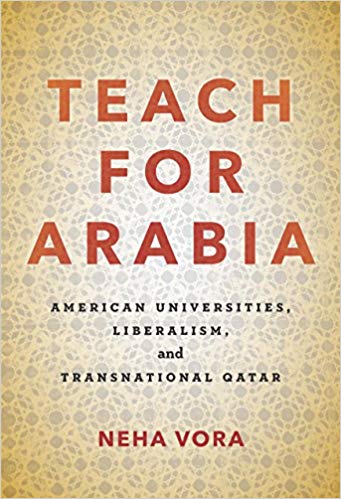 Teach for Arabia offers an ethnographic account of the experiences of students, faculty, and administrators in Education City, Qatar. Education City, home to the branch campuses of six elite American universities, represents the Qatari government’s multibillion dollar investment over the last two decades in growing a local knowledge-based economy. Though leaders have eagerly welcomed these institutions, not all citizens embrace the U.S. universities in their midst. Some critics see them as emblematic of a turn away from traditional values toward Westernization. Qatari students who attend these schools often feel stereotyped and segregated within their spaces. Neha Vora considers how American branch campuses influence notions of identity and citizenship among both citizen and non-citizen residents and contribute to national imaginings of the future and a transnational Qatar. Looking beyond the branch campus, she also confronts mythologies of liberal and illiberal peoples, places, and ideologies that have developed around these universities. Supporters and detractors alike of branch campuses have long ignored the imperial histories of American universities and the exclusions and inequalities that continue to animate daily academic life. From the vantage point of Qatar, Teach for Arabia challenges the assumed mantle of liberalism in Western institutions and illuminates how people can contribute to decolonized university life and knowledge production.