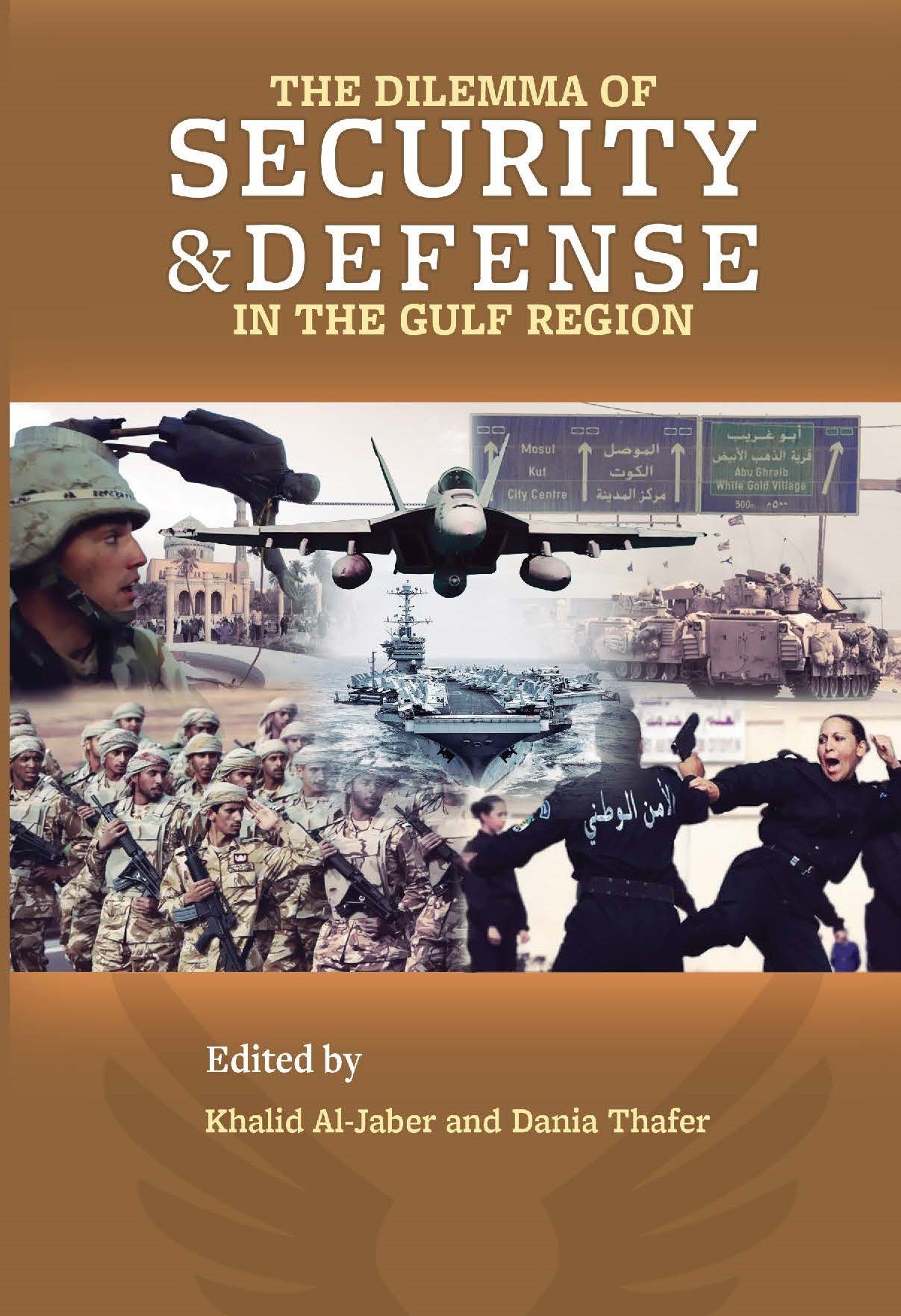 You can purchase a copy of the book HERE.

For a variety of contributing factors, the defense and security status of the Gulf region is facing a dilemma between the maintenance of regional security and the preservation of domestic security interests. This dilemma stems from the perceived decline of U.S. influence and lingering consequences of the Arab Spring movements. Divisions and armed conflicts, both within the Gulf itself and the surrounding region are a result of this changing political order and the ascension of many of the Gulf states on the international scene. These evolving dynamics will set in motion various defense and security consequences for the Gulf and the greater Middle East which are addressed in this edited volume. With contributions from practitioners as well as academics, this book will be a vital resource for both researchers and policymakers.

Dr. Dania Thafer is the Executive Director at Gulf International Forum and a Visiting Scholar at Georgetown University. Ms.Thafer is a political scientist focused on the Gulf region. She has been widely published on matters concerning the Gulf including several articles, a monograph, and a co-edited book entitled “TheArms Trade, Military Services and the Security Market in the Gulf States: Trends and Implications”. Previously, she worked at theNational Defense University. Ms. Thafer has a master’s degree inPolitical Economy from New York University. She is a Political Science Doctoral Candidate at American University in Washington, DC, and she will soon be defending her dissertation which is entitled Obstacles for Innovation in Rentier Economies: States, Elites, and the Emerging Youth.

Ch 1. The History of the Defense and Security Struggle in the Gulf

Khalid Al-Jaber is the Director of the Middle East North Africa Institute in Washington D.C. Previously he served as Editor-in-Chief of The Peninsula, Qatar’s leading English language daily newspaper, and Deputy Editor-in-Chief of Al Sharq (“the East”), the sister Arabic daily of The Peninsula. Dr. Al-Jaber is also a Visiting Assistant Professor for Political Communication in the Gulf Studies Program (GSP) at Qatar University, and a Visiting Assistant Professor at Northwestern University in Doha. Al-Jaber has published a number of books and academic articles on GCC foreign relations, Gulf-U.S. relations, and political communication in the Middle East and North Africa region.

Ch 2. Regional Dynamics of a Changing Gulf Around the War in Yemen, Gulf Crisis and Political Islam

Dr. Courtney Freer, Non-Resident Senior Fellow at Gulf International Forum and a Research Fellow at the Middle East Center at the London School of Economics and Political Science. Dr. Freer’s work focuses on the domestic politics of the Gulf states, with interest in Islamism and tribalism. She previously worked at the Brookings Doha Center and at the U.S.–Saudi Arabian Business Council. She holds a MA in Middle Eastern Studies from George Washington University and a Ph.D. from the University of Oxford. Her book Rentier Islamism: The Influence of the Muslim Brotherhood in Gulf Monarchies was released in 2018 with Oxford University Press.

Ch 3. The Gulf Crisis: A Case for Rethinking the Gulf Region Security Paradigm

Emma Soubrier is a Non-Resident Fellow at Gulf International Forum. Her research focuses on the security strategies and foreign policies of the countries of the Gulf Cooperation Council. Soubrier was previously a postdoctoral researcher at the Centre Michelde l’Hospital, Université Clermont Auvergne (France) and a Visiting Scholar at the Institute for Middle East Studies at the George Washington University’s Elliott School of International Affairs. Soubrier received her PhD in political science from the Université Clermont Auvergne in 2017 and holds an MA in international relations from Sorbonne University (Paris, France).

Ch 4. The New Dynamics of the Gulf: Inflections after the Arab Spring and the GCC Crisis

By Prof. David B. Des Roches

David B. Des Roches is a Professor at the Near East South Asia Center for Strategic Studies. Prof. Des Roches served as the Defense Department Director Responsible for Policy Concerning Saudi Arabia, Kuwait, Qatar, Bahrain, Oman, the UAE and Yemen. He also served in the office of the Secretary of Defense as Liaison to the Department of Homeland Security, as Senior Country Director for Pakistan, as NATO Operations Director and as Deputy Director for Peacekeeping. He graduated from the United States Military Academy and obtained an advanced degree in Arab Politics from the University of London School of Oriental and African Studies, in War Studies from King’s College London, and Strategic Studies from the U.S. Army War College.

Ch 6. GCC Security Issues, As Their Publics See Them: A Rare Look at Real Data

David Pollock is the Bernstein Fellow and the Director of Project Fikra at the Washington Institute for Near East Policy. Dr. Pollock served previously as Senior Advisor for the Broader Middle East at the State Department. From 1996 to 2001, Pollock served in several other State Department policy advisory positions covering South Asia and the Middle East, including four years as a regional expert on the Secretary of State’s Policy Planning Staff. Previously, he was chief of Near East/South Asia/Africa research at the U.S. Information Agency. Pollock has served as a Visiting Lecturer at Harvard University and as an Assistant Professor at George Washington University. He holds a Ph.D. from Harvard University.

Ch 7. GCC States’ Policies toward Iran: Between Engagement and Confrontation

​​Kenneth Katzman serves as a Senior Middle East Analyst for the U.S. Congress, with special emphasis on the Gulf states, Afghanistan, Iran, and Iran-backed groups operating in the Middle East and South Asia. Dr. Katzman has written numerous articles in various outside publications. Dr. Katzman holds a Ph.D. in Political Science from New York University (1991). Dr. Katzman is writing in a personal capacity.

Ch 8. Implications of the War in Yemen on the Gulf Region’s Security

Ambassador (ret.) Gerald Feierstein is Senior Vice President at the Middle East Institute. He retired from the U.S. Foreign Service in May 2016 after a 41-year career with the personal rank of Career Minister. As a diplomat he served in nine overseas postings, including three tours of duty in Pakistan, as well as assignments in Saudi Arabia, Oman, Lebanon, Jerusalem, and Tunisia. In 2010, President Obama appointed Amb. Feierstein as U.S. Ambassador to Yemen, where he served until 2013. From 2013 until his retirement, Amb. Feierstein was Principal Deputy Assistant Secretary of State for Near Eastern Affairs.

Ch 9. Out of the Ashes of Civil War: Whither the Arab State System?

Ross Harrison is a Resident Senior Fellow at the Middle East Institute in Washington, D.C. Professor Harrison is also on the faculties of Georgetown University and the University of Pittsburgh, and the co-editor (with Paul Salem) of ‘Escaping the Conflict Trap: Toward Ending Civil War in the Middle East’, published in 2019.

Ch 10. Turkey and the Gulf States: Geopolitics, Defense, and Security

Bulent Aras is a Senior Scholar and the Coordinator of the Conflict Resolution and Mediation Stream at the Istanbul Policy Center, Sabanci University. He is also a Visiting Professor at Rensselaer Polytechnic Institute. Dr. Aras has published extensively on foreign policy, state, social movements, Islam in Turkey, the Middle East, and Eurasia. He was head of the Turkish Ministry of Foreign Affairs’ Center for Strategic Research from 2009 to 2013. Dr. Aras has published 13 books both abroad and at home, including co-editing ‘Turkey, Arab Spring and Beyond’ published by Routledge in 2016. His articles have appeared in Third World Quarterly, Middle East Policy, Political Science Quarterly, International Journal, Journal of Southern Europe and the Balkans, among others.

Ch 11. The U.S. in the Gulf: A Reevaluation of the Traditional Pillars of American Foreign Policy

Daniel Serwer directs the Conflict Management and American Foreign Policy Programs at the Johns Hopkins School of Advanced International Studies. He is also a Senior Fellow at its Center for Transatlantic Relations and affiliated as a Scholar with the Middle East Institute. His current interests focus on the civilian instruments needed to protect U.S. national security as well as transition and state-building in the Middle East, North Africa and the Balkans. Dr. Serwer has worked on preventing interethnic and sectarian conflict in Iraq. As a Minister-Counselor at the U.S. Department of State, Dr. Serwer directed the European Office of Intelligence and Research.