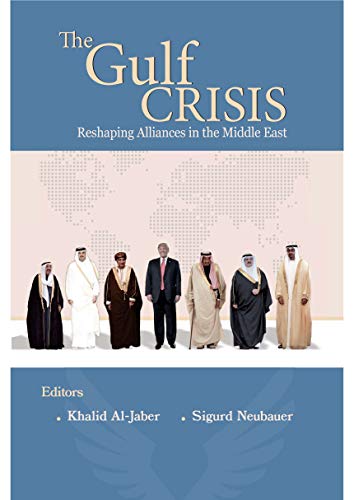 You can buy the book HERE.

The Gulf Crisis marks a clear dividing line in the GCC’s history reflecting a change in the political, economic, security, social and media realities of the intra-GCC relationship. The rift did not only put pressure on the region’s security structure and the Qatari state and society, but also affected American interests and position in the region. The crisis has also changed societies and governments perception of the GCC and casted doubts on Gulf states unity in the face of changing regional alliances and challenges. The question on everyone’s mind: will this Crisis be the final nail in the coffin of the Gulf Cooperation Council after nearly four decades?

Dr. Rumaihi is a Professor of Sociology at the University of Kuwait. He holds a Ph.D. from Durham University and has published more than 20 books about the social and political changes in the Arab Gulf states. He has been an Editor-in-Chief for prominent newspapers and magazines in Kuwait and other Arab Gulf states and was Secretary-General of the National Council for Culture, Arts and Literature 1998-2002.

Ch 2. The Saudi-Emirati Alliance in a Polarized Middle East By Giorgio Cafiero

Giorgio Cafiero is the CEO and founder of Gulf State Analytics, a geopolitical risk consultancy based in Washington, DC. His research interests include geopolitical and security trends in the Arabian Peninsula and the broader Middle East. Mr. Cafiero is a regular contributor to several publications including Al Monitor, The National Interest, and LobeLog. From 2014-2015, he was an analyst at Kroll, an investigative due diligence consultancy. He received an M.A. in International Relations from the University of San Diego.

By Professor David B. Des Roches

Professor David Des Roches, Non-Resident Senior Fellow at Gulf International Forum and an Associate Professor at Near East South Asia Center for Strategic Studies. He joined NESA in 2011 after serving the Office of the Secretary of Defense for Policy in numerous positions, including as Director of the Gulf and Arabian Peninsula, the DoD liaison to the Department of Homeland Security, the Senior Country Director for Pakistan, the NATO Operations Director (where he drafted the NATO comprehensive approach directive), the Deputy Director for Peacekeeping, and the spokesman for the Defense Security Cooperation Agency. Prior to that, he served in the White House Office of National Drug Control Policy as an International Law Enforcement Analyst and Special Assistant for Strategy. Professor Des Roches has lectured at the Qatari Staff College, the Saudi War College, Sciences Po, and is the author of numerous articles and chapters on Gulf security.

Ch 4. The Economic Impact of the Blockade of Qatar By Kristian Coates Ulrichsen

Dr. Kristian Coates Ulrichsen is a Baker Institute fellow for the Middle East and Non-Resident Senior Fellow at Gulf International Forum. Working across the disciplines of political science, international relations and international political economy, his research examines the changing position of Persian Gulf states in the global order, as well as the emergence of longer-term, nonmilitary challenges to regional security. Previously, he worked as senior Gulf analyst at the Gulf Center for Strategic Studies between 2006 and 2008 and as co-director of the Kuwait Program on Development, Governance and Globalization in the Gulf States at the London School of Economics (LSE) from 2008 until 2013

Ch 5. The War of Manufacturing Consent and Public Mobilization By Khalid Al-Jaber

Dr. Khalid al-Jaber is the Director of MENA Center in Washington D.C. Previously, he served at al-Sharq Studies & Research Center and as Editor-in-Chief of The Peninsula, Qatar’s leading English language daily newspaper.

Ch 6. Yemen and the GCC Crisis By Gerald M. Feierstein

Amb. (ret.) Gerald Feierstein is a distinguished senior fellow on U.S. diplomacy at MEI, and director of its Arabian Peninsula Affairs program. He retired from the U.S. Foreign Service in May 2016 after a 41-year career with the personal rank of Career Minister. As a diplomat he served in nine overseas postings, including three tours of duty in Pakistan, as well as assignments in Saudi Arabia, Oman, Lebanon, Jerusalem, and Tunisia. In 2010, President Obama appointed Amb. Feierstein, U.S. Ambassador to Yemen, where he served until 2013. From 2013 until his retirement, Amb. Feierstein was Principal Deputy Assistant Secretary of State for Near Eastern Affairs

Ch 7. Diplomacy behind Washington’s Quest to Solve the Row By Sigurd Neubauer

Sigurd Neubauer is a former non-resident fellow at the Arab Gulf States Institute in Washington. He specializes in U.S. policy toward the Arabian Peninsula and the Persian Gulf region. His expertise includes: Oman, Saudi Arabia, Yemen, Persian Gulf security, inter-GCC dynamics, Arab-Israeli relations, and Afghanistan. Neubauer is also an opinion columnist for Al Arabiya English where he writes about Middle East security, U.S. policy toward the Middle East, and occasionally U.S. politics. He is frequently quoted by the international media and has contributed to Al Jazeera, CNN, Fox News, Foreign Affairs, and The New York Times, among others. His work has also been translated into Arabic and Farsi. He is a frequent lecturer at the U.S. Foreign Service Institute and has addressed a number of international conferences, including in Europe and the Middle East. Neubauer has eight years of experience in the U.S. defense industry; he has worked for a northern Virginia defense consultancy since 2009. He received his BA and MA from Yeshiva University in New York.

Ch 8. Exploring European and Russian Perspectives on the Gulf Crisis By Courtney Freer

Dr. Courtney Freer, Non-Resident Senior Fellow at Gulf International Forum and a Research Fellow at the Middle East Center at the London School of Economics and Political Science. Dr. Freer’s work focuses on the domestic politics of the Gulf states, with interest in Islamism and tribalism. She previously worked at the Brookings Doha Center and at the U.S.–Saudi Arabian Business Council. She holds a MA in Middle Eastern Studies from George Washington University and a Ph.D. from the University of Oxford. Her book Rentier Islamism: The Influence of the Muslim Brotherhood in Gulf Monarchies was released in 2018 with Oxford University Press.