To understand strides made by Omani women, look no further than inspiring historical figures and opportunities provided by the nation’s seafaring past.

Throughout modern history, western writers, journalists, and pundits have portrayed women of the Middle East in sweeping, static, and monolithic terms. Without benefit of either fieldwork or serious inquiry, women of “the Orient” have been characterized in fiction, popular lore, and the mainstream media as faceless, submissive victims, at the mercy of their male counterparts.

Broad in scope and stubbornly entrenched in the western mind, such stereotypes have led those unfamiliar with the dynamics of Arab/Islamic society to view the other with a thinly-veiled level of disdain. More seriously, they have served to rationalize a series of reckless adventures in the region designed to “save” Arab culture from itself.

An examination of the dynamic role of women in the Sultanate of Oman not only defies this largely-unchallenged, if flawed, western image of the Arab woman but also demonstrates the degree to which women, the backbone of societal continuity, have contributed to the development of this ancient land, from a poor and neglected backwater fifty years ago to the modern, stable, and optimistic state it is today.

By any measure, women throughout the Arab Gulf have made impressive strides in recent years. In this context, Oman is particularly noteworthy. It is a country in which women are integrated into the public arena at many levels, from the highest positions of government service to the less vaunted, but equally important, areas of employment in the security forces, service industries, and entrepreneurial sectors.

Drawing from history and tradition, women in Oman draw inspiration from a plethora of role models. In the pre-Islamic era, Queen Shamsa was renowned for her political and diplomatic acumen, safeguarding Oman’s independence at the height of its fame as a copper producer. From the earliest years of Islam, women were empowered not only by the unprecedented rights and privileges afforded them by the Qur’an but also by the example of legendary female leaders of the faith, including Khadija, a successful businesswomen, wife of the Prophet Muhammad and first to embrace the new faith, as well as Aisha, warrior, scholar of hadith, and daughter of the Prophet.

As citizens of a country with a venerable maritime tradition, Omani women have long been indispensable to the preservation of social and economic life of their communities. At the height of Oman’s power in both East Africa and South Asia, Omani men, engaged in trade and commerce, traveled abroad for extended periods of time, leaving behind in Arabia their womenfolk who assumed the financial and managerial responsibilities critical to their families’ welfare. 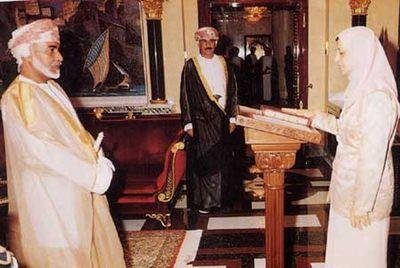 Since 1970, the driving force behind the integration of women in Oman’s renaissance has been Qaboos bin Said, Sultan of Oman. By encouraging women to serve alongside their male cohorts as equal partners in national development, the Arab world’s senior statesman has established a climate of inclusion in which all citizens view themselves as stakeholders in their country’s march toward modernity, prosperity, and stability. In countless ways, both public and private, women, as well as men, can take legitimate pride in their achievements.

The “Basic Law of the Sultanate of Oman,” effectively the country’s constitution, guarantees both men and women equal protection under the law. In addition to enjoying access to education at every level, women in Oman have the right to own property, manage businesses, and pursue employment in a wide range of fields. Omani women serve at the highest levels of government   — at home, at the ministerial level, within the corridors of the Majlis Oman (“Council of Oman”), the nation’s parliamentary body, and abroad, at the ambassadorial level. They serve as security officers, airline pilots, engineers, truck drivers, and cashiers. They are celebrated for their contributions to literature and the arts, science and education, sports, and the media. Their representation across a wide spectrum of public pursuits is remarkable, particularly when measured against that of their female counterparts in neighboring countries of the GCC.

Still, the full integration of women in national development in Oman, as elsewhere, remains elusive. While universal suffrage was extended to all citizens of the Sultanate in 2002, the participation of women in the national political arena is incomplete. Despite regular entreaties from Sultan Qaboos for greater inclusion of women in the Majlis al-Shura (“Consultative Council),” in the lower, elected house of the Majlis Oman, the percentage of women remains low.

The reasons for this are complex. Oman, though modern and progressive in many respects, remains a deeply conservative country. Traditions surrounding political decision-making, particularly on the national scale, continue to favor male authority. As the notion of representative, parliamentary-style governance, a relatively new phenomenon in Arab Gulf societies, becomes increasingly absorbed into the cultural ethos of Oman, women will likely embrace opportunities for public service with as much enthusiasm as they have in other areas of public life. While the mechanisms of state are in place for women’s empowerment at all levels, entrenched cultural attitudes and behaviors change more slowly. Still, Oman’s ruler remains confident: “We are making progress, but quietly. Slowly. I believe in evolution … and not a sudden evolution … (T)he progress we have made is irreversible.”

Linda Pappas Funsch is a Professor of Middle East and Islamic Studies.

Linda Pappas Funsch is a Professor of Middle East and Islamic Studies.