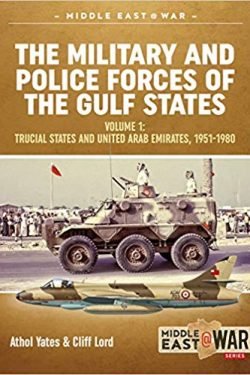 This narrative includes historical information regarding the various states and enables the reader to understand easily how the various militaries have evolved.

The military forces mainly evolved from Emiri (princely) and city guards into competent military organisations with some of the world most sophisticated military technology. British seconded and contract officers and men shaped these forces through establishing, leading, advising and training them.

Maps of the areas concerned are provided, along with a glossary of terms and many ORBATs in diagrammatical form. Historical overviews and military history of the forces is provided along with regimental histories for Oman. Scores of photographs are included showing the uniforms and a selection of badges and insignia.

The work has been written by Cliff Lord and Dr Athol Yates. Cliff has had published a number of books including a history of the Armed Forces of Aden and the Protectorate, which in some respects is a lead on to this history. Dr Athol Yates is Assistant Professor at Al Khalifa University in Abu Dhabi and specializes in military history and security. The authors have a wealth of photographs and information from interviews with veterans of many of the forces included, and help from the Trucial Oman Scouts Association, Sultan’s Armed Forces Association, and have had access to archival and museum research in Britain and the Gulf States.