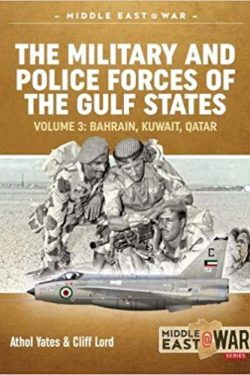 By Athol Yates and Cliff Lord
Books
Posted On: January 5, 2020

The Military and Police Forces of the Gulf States, Volume 3,  covers the military, police, and selected para-military services of Bahrain, Kuwait and Qatar from early 20th Century until 2010.

Great Britain and these three states have had various mutual defence treaties since centuries. This resulted in establishment of very close ties between the British and the Sultan of Oman’s armed forces. Since 1920s, the British seconded and contract personnel served with the latter services through forming, leading, advising and training them.