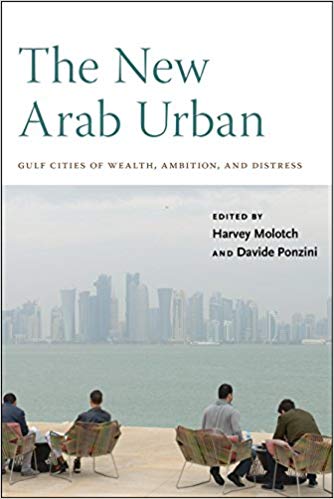 By Harvey Molotch and Davide Ponzini
Books
Posted On: February 5, 2019

The fast-growing cities of the Persian Gulf are, whatever else they may be, indisputably sensational. The world’s tallest building is in Dubai; the 2022 World Cup in soccer will be played in fantastic Qatar facilities; Saudi Arabia is building five new cities from scratch; the Louvre, the Guggenheim and the Sorbonne, as well as many American and European universities, all have handsome outposts and campuses in the region. Such initiatives bespeak strategies to diversify economies and pursue grand ambitions across the Earth.

Shining special light on Dubai, Abu Dhabi, and Doha—where the dynamics of extreme urbanization are so strongly evident—the authors of The New Arab Urban trace what happens when money is plentiful, regulation weak, and labor conditions severe. Just how do authorities in such settings reconcile goals of oft-claimed civic betterment with hyper-segregation and radical inequality?  How do they align cosmopolitan sensibilities with authoritarian rule? How do these elite custodians arrange tactical alliances to protect particular forms of social stratification and political control? What sense can be made of their massive investment for environmental breakthrough in the midst of world-class ecological mayhem?

To address such questions, this book’s contributors place the new Arab urban in wider contexts of trade, technology, and design. Drawn from across disciplines and diverse home countries, they investigate how these cities import projects, plans and structures from the outside, but also how, increasingly, Gulf-originated initiatives disseminate to cities far afield.

Brought together by noted scholars, sociologist Harvey Molotch and urban analyst Davide Ponzini, this timely volume adds to our understanding of the modern Arab metropolis—as well as of cities more generally. Gulf cities display development patterns that, however unanticipated in the standard paradigms of urban scholarship, now impact the world.