Roughly ten years ago the UAE devised a strategy for establishing a strong Emirati military presence in Somalia, Yemen and the Bab al-Mandab (BAM). Ultimately, Abu Dhabi’s interest has been to project the UAE into the Horn of Africa.  At this juncture, amid the disintegration of the Yemeni state, Abu Dhabi in tandem with Saudi Arabia is shaping the strategic environment, for better or for worse.  The UAE’s growing influence throughout Africa and the Arabian Peninsula’s southwestern corner must be interpreted within a complicated geopolitical context.  Abu Dhabi is in competition with Turkey and a host of regional and international actors, including China and Russia.  Such strategic competition is pitting a host of different powers against each other as these different actors seek to assert their clout in the Red Sea and Gulf of Aden.  The future security landscape of the southwestern Arabian Peninsula and Horn of Africa will bear major implications for the future of global energy trade as the flow of energy from East to West and North to South traverses the BAM and remains vulnerable to the forces of piracy and terrorism.

While the Saudis and other allies are conducting their air and ground campaign targeting Houthis, for the most part, the UAE’s military forces are spread across this arc of land and sea, and involved in major operations, using special operators to achieve strategic goals.  The path stretches from Mahra Province along the Yemeni-Omani border to Somalia.  In the Emirati path to controlling Yemeni territory has been infighting among Yemeni notables in the Southern Security Belt scrambling for influence and power as Aden’s future governance is determined.

There is another strategic angle to consider:  The Emirates see themselves not just as an advanced Arab country but also as one with security interests that stretch throughout the Indian Ocean.  The Emirati desire to project geopolitical clout south of the Arabian Peninsula is a part of Abu Dhabi’s strategic vision.  The UAE sees its maritime domain stretching from India and the Maldives all the way down Africa’s east coast to Zanzibar and beyond. 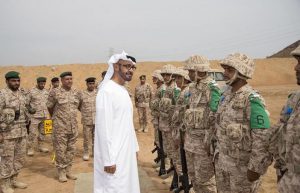 Thus, the BAM is now increasingly militarized out of necessity to maintain the free flow of maritime traffic. The result of the Emirati strategic vision and placement of military forces is turning the BAM and the countries on both sides of the strait into a hot zone.  These straits, gulfs, and seas are now filled with an increasing number of bases from land to sea.  Here it is not necessary to review the many new facilities, and the politics surrounding operational presence of Emirati or Saudi forces. What is important is that the geopolitical picture is beginning to show the Gulf military campaign giving way to a grab for influence near key transit zones.

To be sure, the carving out of ports, and lands of the Horn of Africa and in the BAM for military use is a direct outcome from the Gulf States pushing to transform Somalia and Yemen into functioning and secure neighbors.  But the Gulf States failed to see that both countries are inclined naturally to reject any external power imposing political and economic model that may not fit the complex nature of both Somali and Yemeni societies.

In turn, Saudi military reach is evident in Riyadh’s Yemen operations.  Naval capabilities are growing but the Saudi navy has no real reach and is a littoral force which is the best type of navy to have in the Gulf of Aden, Persian Gulf, and Sea of Oman.  Emirati and Saudi naval operations are a long tradition and the challenges the two navies face are ones that they had planned for even with new and emerging maritime threats.  Five years ago both navies foresaw the evolution of the maritime threat from Iran and from other state or non-state actors from the Horn of Africa or around the Gulf of Oman.  These officials recognized that piracy off the coast of Somalia would return in a new form from a different shore. From this perspective, the GCC maritime environment surrounding the Arabian Peninsula is being secured in cooperation with other extra-regional navies in what is a race for presence.

Here is where China enters this unique maritime environment.  China’s entrance into Yemen via Aden brings an interesting new dynamic to this strategic arena. The meeting between Vice President Lt. General Ali Moshen with Acting Chinese Ambassador to Yemen on March 12 signaled the beginning of a new role for China in supporting a peaceful resolution.  Beijing is fostering a relationship with Aden authorities to bring a semblance of peace to the port city to begin boosting relationships with local officials from many different camps.

Importantly, Beijing’s use of Aden raises important questions about Russia’s role in Yemen.  Moscow’s ties to the UAE and to both the Houthis and Aden helps the Russian role as an arbitrator in Yemen should talks in Oman fail to return any dividends.  Russia continues to print currency for the government in Aden.  Quite obviously, there is an important new intersection between Russia and the Arab states due to Beijing’s prowess that still needs to be played out. 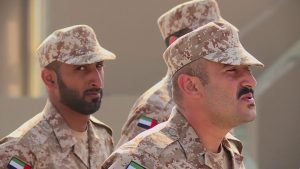 Right in front of everyone, the Chinese naval presence across the northern arc of the Indian Ocean is growing rapidly in ports such as Gwadar, Chabahar, Duqm, and Djibouti, and now with Aden. Others are springing up in East Africa. A new port arrangement in Sri Lanka can be added to the growing list of Chinese berths to enhance a hub and spoke system across the Indian Ocean with a rather interesting web of maritime facilities springing up across the northwest part of the Indian Ocean.  This fact gives the People’s Liberation Army Navy (PLAN) plenty of berthing and presence in key maritime zones around the Arabian Peninsula.  In addition, China’s One Belt, One Road (OBOR) has a maritime portion too and key nodes of Beijing’s plan match the UAE strategic picture.  China’s ability to partner and ally with the Gulf states in this environment illustrates Beijing’s ability to bypass Russia in actual maritime presence.  Beijing has a vested interest in making sure sea routes, especially thru the BAM and the Gulfs of Aden and the Sea of Oman remain threat-free.

Importantly, China is a major weapons seller to the Gulf militaries with sales involving drones and air systems that help to keep the Gulf States weaponized not just for the strategic arena surrounding the southern part of the Arabian Peninsula but also within the Gulf itself.  The price for a PLAN presence for the Gulf Arabs who support Emirati policy are now seeing the results in a trade-offs in the energy deals including Abu Dhabi’s ADNOC concessions to Beijing.  These energy deals help cement China’s presence in the Gulf in new ways.  Chinese companies are pushing hard to sell more armaments to the Gulf militaries and Beijing’s ability to demonstrate a way to help end Yemen’s plight would be welcomed by the Gulf Arab states.

In the near term, Gulf militaries will buy more weaponry from those countries producing armaments that fit the strategic requirements for controlling the battlespace between Somalia and Yemen based on lessons-learned.  Gulf militaries are learning as they go despite what is becoming to be a multi-year battle for Yemen and Somalia’s future.  Military prowess today doesn’t necessarily mean better results.  The battle now too is about optics.  Perceptions that are important such as the UAE assistance program on Socotra helps allow the Emirates to operate from the strategic island. The UAE faces no real opposition to its presence on Socotra and that gives the UAE its presence in Mahra and Socotra simply because of the language and culture.  But from there all bets are off:  Other Emirati bases peppered across these strategic lands and waterways may face tough political facts on the ground and on the sea.

While there are areas of dispute between Riyadh and Abu Dhabi on issues in Yemen especially over the military campaign, one topic that unites the two sides together is Turkey.  For both the Kingdom and the UAE, Turkey’s ongoing push into Somalia is forcing the UAE out of other parts of the clan-based country.  Ankara’s ability to succeed where the Emiratis are failing is remarkable and speaks volumes about Turkey’s diplomacy and military training program versus the Emirates public-private partnerships model and special operator programs.  Turkey is boasting of its new presence in Somalia as further evidence of Ankara’s Africa policy.  The Turkish Assistance Model was more efficient then Arabian Peninsula-based charities because of the UAE’s focus on security assistance and port development.  Turkey’s direct social services model won hearts and minds. To boot, Qatar is now establishing also a base in Somalia with Turkish help.   Based on current tensions in the region, Ankara’s penetration of Africa is a direct affront to the Saudis and Emiratis who see Turkish activity as meddling and an insult to Gulf historical memory.  Obviously, not all Gulf States share this viewpoint and with the eventuality of a King Mohammed bin Salman, the future course of this fundamental historical disagreement will only exacerbate problems in the geographical area in question.

Overall, Gulf military activity, led by Saudi Arabia and the UAE, is continuing to reverberate across Yemen, Somalia, and the BAM.  Again, how a King Mohammed bin Salman will resolve the problems which the Kingdom is facing with the UAE’s strategic and military presence throughout this unique geopolitical arc remains to be seen. The tug and pull of the centrifugal geopolitical forces around the southern stretch of the Arabian Peninsula and south in the Horn of Africa, originally created by the UAE, is on full display.