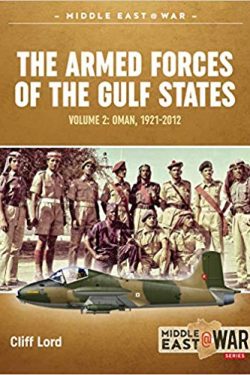 This book provides an overview of the military forces of Muscat & Oman and successor State of Oman. Britain and Oman have had various treaties over several centuries brought closer with Britain’s involvement in creating the Sultan’s Armed Forces. The book covers the Muscat Armed Forces and the Sultan’s Armed Forces of Oman, Dhofar Force, plus selected paramilitary forces and the Royal Oman Police Force. The narrative includes regimental and corps histories, and selected military operations. The book also details the contribution made by British seconded and contract personnel who have shaped these forces from the 1920s to the present, through forming, leading, advising and training them.

Maps of the areas concerned are provided, along with a glossary of terms and a comprehensive time chart showing the dates of formation and disbandment of units, and if they were merged or reformed into new units. Many photographs are included showing the uniforms and a selection of badges and insignia.