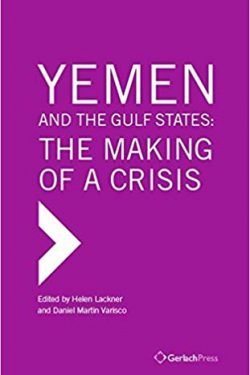 By Helen Lackner and Daniel Martin Varisco
Books
Posted On: October 15, 2017
Yemen is the only state on the Arabian Peninsula that is not a member of the GCC (Gulf Cooperation Council). It is also the only local state not ruled by a royal family. Relations between Yemen and the GCC states go back for centuries with some tribes in Saudi Arabia, Kuwait, Qatar, the United Arab Emirates and Oman tracing genealogy back to ancient Yemen. In this timely volume six scholars analyze Yemen’s relations with Saudi Arabia, the United Arab Emirates, Oman and Iran with a focus on recent developments, including the conflict after the fall of Ali Abdullah Salih in Yemen. This volume is based on a workshop held at the Gulf Research Meeting organized by the Gulf Research Center Cambridge in summer 2016.