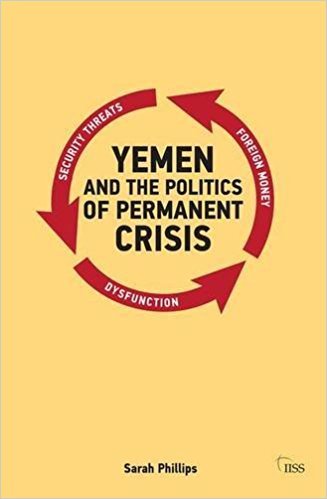 The winds of the Arab Spring have blown from Tunisia and Egypt to Yemen’s shores, and have left Yemen’s President Saleh in the cold.  Sarah Phillips’ timely new book, while succinct, provides considerable insight into the complex nature of internal Yemeni politics, and especially the motivations of its beleaguered president.  Most importantly, however, it convincingly argues that the type of support provided by outside donors exacerbate the crisis rather than address the causes of tension and strife.  The main focus of the book is the internal machinations of the Saleh regime, and not a detailed description of the actual crises themselves.  For those looking for a full accounting of Yemeni problems, they won’t find it in this book. However, Sarah Phillip’s contribution is invaluable not only for those who wish to learn more about Yemeni politics and the crises in Yemen, but for policymakers looking for a better understanding of how to secure their interests in the region.

Phillips begins her book with a brief description of the path the country has taken to its current state of affairs.  The Saleh regime faces dangers from the Houthi rebellion in the north, the Southern secessionist movement, and increasing power of al-Qaeda in the Arabian Peninsula.  These crises, coupled with rapidly dwindling resources and an unmanaged economy, threaten to cause state failure in Yemen.  Moreover, the Arab Spring movements and President Saleh’s harsh response to the demonstrations within his borders have brought into sharp relief the disdain he feels for the non-elite in his country.  As Phillips points out, “As Arab uprisings have illustrated, beliefs and perceptions of risk can shift much faster than the playbooks of ageing autocrats.”

The playbook to which Saleh turns to time and again are two-fold:  First is the systemic practice of neo-patrimonialism, which has been part and parcel of Saleh’s 33 year rule over Yemen.  This system has served to solidify his power and weaken potential contenders.  Phillips spends much of her time on this subject.  She gives an in-depth description of the regime and the powerbrokers within it, including the Hashid and Bakil tribal confederations and the military elite.  She also points out that some who receive payouts from the government (such as tribal sheikhs) have only limited, transient power within Yemen.  The nature of the patrimonial system ensures that no group gains sufficient power to pose a threat to the regime, and that many of those who receive largesse from the government are buying it with their loyalty.  As soon as their loyalty is questioned, the well dries up.  Furthermore, due to the weak economy, they have nowhere to turn but the Saleh regime for survival.

Secondly, Saleh has used the crises within Yemen as an excuse to call for outside aid.  Yemen has received hundreds of millions of dollars in aid from its two main donors – Saudi Arabia and the United States.  There are many, including Phillips, who argue that the Saleh regime uses the crises as a call for aid.  What is quite troubling, however, is that the effort Saleh puts toward resolving the problems is uneven at best.  Despite the huge amounts of aid transferred to Yemen, Saleh has done little to nothing to prepare Yemen for the future.  At worst, the regime is complicit in the escape of dozens of known terrorists from their jails, but of assassinating peaceful demonstrators in Sana’a during the recent Arab Spring protests.  In short, Saleh focuses only on the future of his regime, and not the future of Yemen.

Unfortunately, there are two minor areas where her book falls a bit short.  First, the descriptions of the crisis areas within Yemen are limited.  While the problems facing Yemen are discussed, a full accounting of their origins and how they have been handled by the Saleh regime is not included.  On a positive note, there is a substantial body of literature, including works from Phillips herself, which goes into much more detail on this matter.  Furthermore, her discussion of the problems is sufficient to bolster her argument that the type of aid being given – which is geared toward ‘stabilizing’ the regime, is quite misdirected.

The second shortcoming of the book is the short section at the end dealing with the Arab Spring.  In this instance, it seems that Phillips decided that delaying the book in order to give a full account of the Arab Spring in Yemen was less important than immediate publication.  This is a smart move, as her book can be used by policymakers to make immediate changes to misguided support for the Saleh regime.

Despite these minor shortfalls, Sarah Phillips has given us a book that provides keen insight into Yemen, but is immediately useful to anybody who is interested in the country.  The book is particularly relevant given the resurgence of Al-Qaeda in the Arabian Peninsula in recent months, and will help U.S. strategists craft a more nuanced policy that recognizes the waning power of the Saleh regime.