The shocking resignation of Tehran’s Foreign Minister and chief diplomat Mohammed Javad Zarif has revealed the rising tensions between President Hasan Rouhani’s team of reformists and Iran’s hardliners. These fractures among Iran’s powerbrokers emerged consequent to the onset of the country’s economic problems after the United States pulled out of the JCPOA agreement. Conservatives mainly cast their blame on FM Zarif due to his inability to reach a deal with Europe that preserved the Iranian economic benefits of the JCPOA. Ultimately President Rouhani rejected Zarif’s resignation and for the foreseeable future he will remain in his current position. However, despite Zarif’s continuity in his posting, the situation resulting from his attempted resignation may, for three primary reasons, constitute a challenging time for Iran’s chief diplomat. First, the support given to Zarif by the Supreme Leader will likely make hardliners more determined to continue their pressure. Second, European tensions are rising due to assassinations of Iranian dissidents residing in the continent, in addition to hardliners resentment over the limited capacity of the non-dollar trade channel created by Europe. Third, no signs of a breakthrough with the U.S. will increase pressure on the reformist minister who has long been blamed by conservative figures, MPs, Mullahs, and officials, for trusting the U.S. in the first place.

A Parade of Support for Zarif

Only twenty-four hours after Zarif took to his Instagram account to announce his unexpected resignation, Khamenei moved swiftly to end what could have possibly been a major political crisis and setback for Iran’s foreign policy. Should Zarif’s departure have actualized it could have left a hard-to-fill void. Zarif’s skills and experience constitute a rare mix able to appease three vastly different poles: the Obama Administration, European leaders, and Ayatollah Khamenei. On several occasions, the Supreme Leader endorsed his line of diplomacy, but more importantly, Zarif also rebuilt a long-lost trust with European leaders. Most impressive however was that for the first time since 1979 the Iranian Foreign Minister managed to open a diplomatic channel between Tehran and Washington. When Iranian leadership tapped Zarif for his position in 2013, his most notable achievement up to that point had been preserving Iran’s nuclear rights while simultaneously restoring the Islamic Republic’s western diplomatic channels. Such a background was a win-win case for the conservatives and reformists, a testament to Zarif’s negotiating skills, both internally and internationally. This background contributed to the Supreme Leader’s realization that losing such a talent was not in the best interest of Tehran, especially at a time when Washington’s mounting pressure is being compounded by European leaders echoing criticism of the country’s ballistic missile program.[1] The Supreme Leader recognizes Zarif as a valuable asset who has succeeded (and continues to succeed) at countering the image of Iran’s “maligned policies” by presenting an alternative image of Tehran as a party committed to the international norms of the JCPOA that have been abandoned by the United States.

Aside from the ramifications on Iran’s foreign policy, a delicate examination of the background leading up to Zarif’s resignation reveals another well-calculated maneuver by the Foreign Minister. Zarif has arguably emerged from this debacle in a more empowered position. The reversal of his resignation resulted in public endorsements of support for Zarif from  Ayatollah Khamenei who described him as “trustworthy,” in addition to an equally important message of support from Qasem Sulaimani, the head of the IRGC’s premier AlQuds Force and a prominent conservative also trusted by the Supreme Leader.[2] This united show of trust in Zarif could be reflected in support for Rouhani’s cabinet, which has been increasingly criticized by the Iranian parliament. Over the course of the last few months, several MPs from the conservative bloc have summoned many members of Rouhani’s cabinet, (including the President himself) in order to grill them over Iran’s deteriorating living conditions.[3] 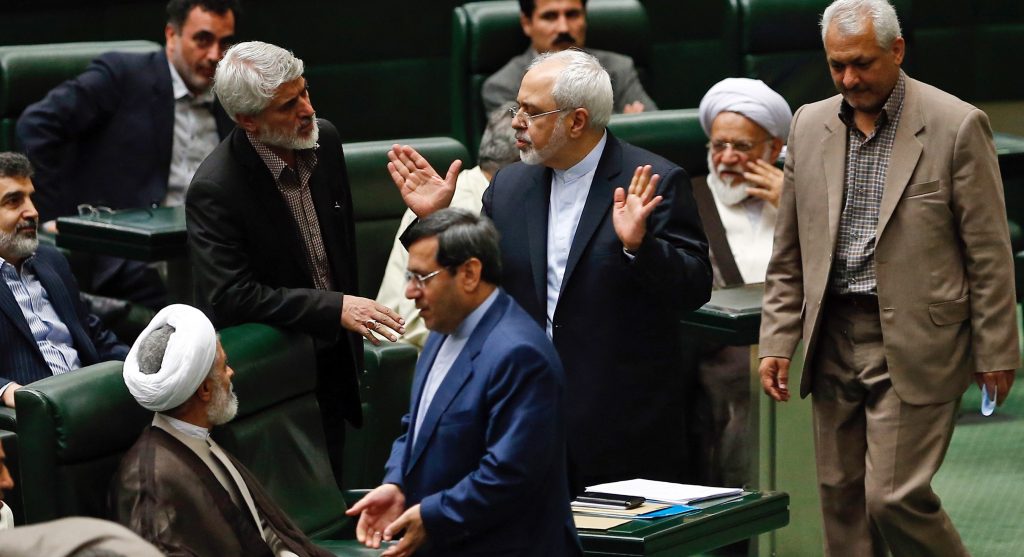 By resigning, Zarif evidenced his clear frustration due to his perception of a growing alienation between the Foreign Ministry and the policies ultimately enacted by Iran in the region. This growing divide was best evidenced when the Foreign Ministry confirmed reports that Zarif had not been informed about the Syrian President’s visit to Tehran, Iran’s major ally in the region.[4] This came in spite of the fact that Tehran’s support to the Syrian regime with militias and arms was a main challenge for Zarif’s foreign agenda with Europe and the Obama administration. Compounding the disagreement is the reality that Iran’s role in Syria is one of the main reasons given by Trump justifying the U.S.’ withdrawal from the JCPOA. Even before Assad’s visit, Zarif had received most of the blame for the U.S’ withdrawal from the JCOA, with many commentators criticizing Zarif’s apparent naivete for trusting Washington in the first place. Public scorn of Zarif is perhaps only matched by that which was cast on him by hardliners from 2013-2015 when detractors similarly depicted the United States as an untrustworthy actor.[5] [6]

The sheer level of tension among the Iranian factions has been made even more clear by Zarif’s critics who revealed that the embattled Foreign Minister has submitted his resignation to the president thirteen times over the last six years. Each time however Rouhani did not accept his resignation requests. Rouhani’s speeches since the increases in hostility between Tehran and Washington that began in May 2018 have also revealed the fractures amongst Iran’s ruling factions. On several occasions, Rouhani has called for national unity among Iran’s opposing camps in order to best face the US “threat.”[7] [8] Most recently, when rejecting Zarif’s resignation Rouhani called for harmonization among the state’s institutions. 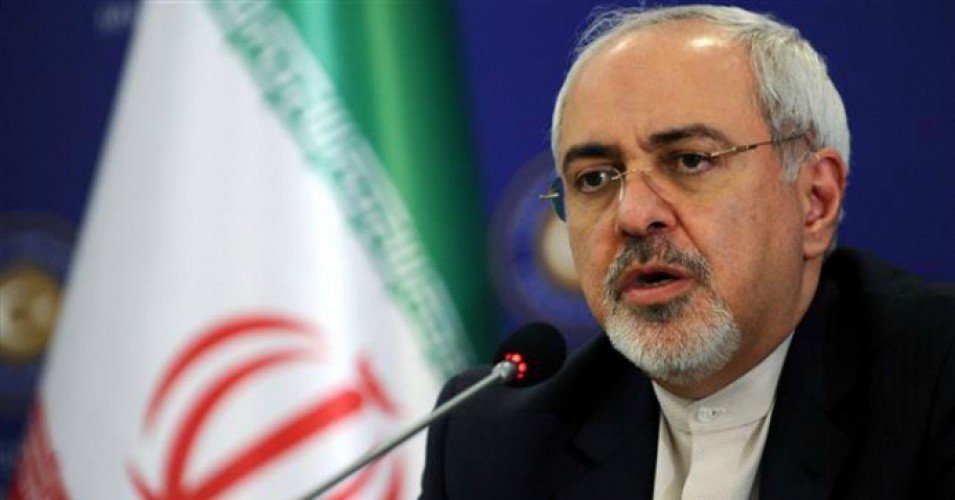 The storm following the resignation and the parade of support from leadership commenting on Zarif’s capabilities has probably made the Foreign Minister’s mission more difficult. Internally, he is viewed negatively by many of the Islamic Revolution’s founding conservatives as an American-educated official whose career has been built by negotiating with Western diplomats. While this perception holds some truth, this criticism ignores the fact that Zarif proved most effective among Iran’s diplomats to advance Tehran’s interests in the West in the post-Islamic Revolution era. Not only does Zarif negotiate Iran’s best interests with the west, but also is by far the most capable mouthpiece among Iranian officials in speaking to western media and audiences concerning Iran’s oft-maligned expansionist national interests.

In spite of this support from Khamenei, Zarif’s main challenge remains to persuade the hardliners to keep Tehran in the nuclear deal. Several conservatives, including the Supreme Leader, made clear their doubts about the Europeans’ ability to bypass U.S. sanctions.[9] Their doubts were actualized when the transaction channel created by Europe following months of negotiations was not even remotely as the Iranians had demanded. In reality, after months of negotiations with the U.S. and Iran, Europe’s new mechanism only allows for deals and the trading of goods that are mostly not subject to U.S. sanctions.[10]

Given the public rejection of his resignation, further efforts to challenge him may now prove more difficult for conservatives. Nevertheless, pressure from conservatives is likely to continue with the ultimate goal of his removal. If successful, replacing Zarif with a comparable reformer would prove a difficult process for a government already foisting resentment on moderates, thereby giving hardliners a new voice in government.

Internationally Zarif is facing rising tensions with Europe because of recent ballistic missile tests and the assassination of Iranian dissidents in Europe. The tests were criticized by Europe while some European countries agreed with Washington by considering it a violation of the nuclear deal. Additionally, the assassination of Iranian dissidents in Europe has been linked by France and Denmark to an operative for an Iranian security program.[11] These two incidents executed by hardliner-led institutions will make the reformist minister’s job more difficult to undermine the Trump Administration’s active attempts to persuade Europe to end the JCPOA and sanction Iran because of its “malign policies”.

In conclusion, Iran’s chief diplomat has returned to his position stronger than when he faced mounting criticism in years past. Yet, the hardliners in Iran’s parliament, army and IRGC will continue to undermine the role of the Foreign Minister. Additionally, all this support could vanish if the economic crisis leads to more protests. Eventually, the government would need a scapegoat to lower the tension with protestors, a position that could easily be filled by Zarif. Meanwhile, the handling of the resignation by the Iranian leadership was another assertation by Khamenei and his inner circle that decision making in Tehran is not reactionary, and they are capable to turn any crisis into an occasion to assert unity among hardliners and moderates.

[11] “Iran hit with sanctions after being blamed for killing dissidents”. Aljazeera. January 8, 2019