Tapping into Prime Minister Theresa May’s promise of a post-Brexit “truly global Britain,” the decision to leave the European Union has consistently been cast by pro-Brexiteers as an economic opportunity for the United Kingdom to lose its “shackles” and fulfill its economic potential through new bilateral engagements.[1] Indeed, strengthening economic partnerships offers opportunities to increase export growth and investment flows. In order to build “a strong, self-governing global Britain,” the UK is likely to leverage pre-existing economic cooperation with Middle Eastern trading partners to enhance investment opportunities and trade volumes through multilateral and bilateral trade agreements. [2] The GCC states – in particular Saudi Arabia and the United Arab Emirates – are well-positioned to do this based on abundant capital and historic relations with the UK; nevertheless, significant obstacles remain. 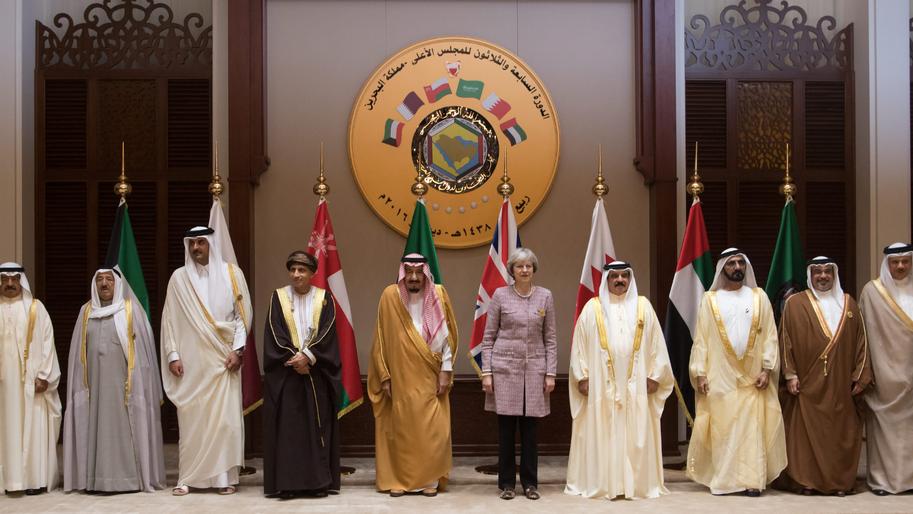 In the attempt to create what Trade Commissioner for the Middle East Simon Penny termed “a positive story,” the UK has been exploring strategies to buoy its economy since the 2016 vote.[3] Britain has been especially optimistic about reconceptualizing and boosting its trade relations with the six member states of GCC – a wealthy consortium of Gulf Arab states that contains approximately 30 percent of the world’s proven oil reserves and includes prominent trading hubs with strong links to Asian markets. Britain is well-positioned to bolster its economic relations with the GCC due to long-standing trade ties.[4] According to British government statistics, the Gulf region accounts for $50.83 billion of the UK’s $57.19 billion worth of trade with the Middle East.[5] With that, the UK is responsible for almost a third of all trade between the EU and GCC, amounting to $162.8 billion in 2017.[6]

The Gulf region constitutes an attractive international market for British firms in the post-Brexit era. GCC member states have approximately 27 million national consumers and 29 million foreign nationals, a combined gross domestic product of $1.7 trillion, sovereign wealth funds worth roughly $3 trillion, and private wealth of at least $1.5 trillion. It is unsurprising, then, that the UK has identified $38 billion worth of new opportunities annually for British businesses in the GCC region by 2021. [7] [8] [9]

A key economic goal for Britain is to achieve a five percent increase in trade contribution to its GDP. One way of accomplishing this would be to boost exports among the approximately 400,000 export-ready firms based in England. [10] [11] To strengthen commercial cooperation with the Gulf region, the British government established a dedicated UK Export Finance (UKEF) team in Dubai last year. The presence of the in-market export credit agency showcases the UK’s local investment potential and possesses a $11.7 billion fund to finance UAE projects and another $5.8 billion to fund Saudi Arabian projects. [12] In 2017, UKEF contributed $220 million in support for Dubai Arena, which constituted the largest single allocation of UKEF support in any region that year. [13]

The UK is also seeking to leverage its technological expertise to engage with the various visions, strategies, and transformation agendas of GCC governments, such as Saudi Arabia’s Vision 2030 and the UAE’s Vision 2021. During a 2017 visit to Riyadh aimed at bolstering regional ties, the UK’s delegation engaged in discussions on British assistance with Vision 2030 and arranged for a bilateral trade agreement. This arrangement was later solidified in May 2018 as a trade deal worth $90.29 billion. [14] Expo 2020 Dubai, a World Expo dedicated to showcasing innovation, has similarly been conceived as an opportunity for Britain to evidence advances in renewable energy and artificial intelligence (AI), among other sectors. For example, the UK-designed pavilion seeks to “beam out a collective AI-generated global message” as a means to highlight the UK’s potential contribution to large-scale economic transformations. [15] The GCC also has much to gain from developing alternative energy sources. In a 2016 report, the International Renewable Energy Agency (IRENA), noted that achieving the renewable energy plans for the electricity sectors in the region could translate to overall savings of as much as $87 billion, in addition to the creation of an average of 140,000 direct jobs per year. [16]

While uncertainty remains concerning the exact nature of Britain’s exit from the EU, and, importantly, its long-term economic effects, Arab Gulf states have reaffirmed their commitment to the UK in the wake of the referendum, both in words and in action. The United Arab Emirates, which is the UK’s biggest export market in the Middle East and an important entry point for goods to the GCC, saw its bilateral trade with the UK increase in 2017 to $22.7 billion, up by 12.3 percent from 2016. [17] [18] Mutual investments between Kuwait and the UK reached $4.4 billion in 2018, an 8% increase since 2017. In the immediate aftermath of the vote, Sheikh Mohammed bin Rashid, Vice President and Ruler of Dubai, stated that the UAE “remain[s] committed to our long and close partnership with the UK,” while the Qatari Prime Minister Sheikh Abdullah bin Nasser bin Khalifa Al-Thani announced that the Qatar Investment Authority would invest an additional $6.6 billion in the UK after Brexit. [19] [20]

Gulf investments in the UK are not simply a sign of goodwill. Rather, the devaluation of the British pound – the most immediate and visible impact of the referendum – means that UK companies and property represent a cheaper investment for institutional and private investors banking on the long-term health of the British market. However, fears of foreigners’ acquisition of strategic British companies will force the UK to balance its desire to remain a top foreign direct investment destination against addressing national interest concerns.

London has also been vying to secure new trade deals to minimize the economic harm of a hard Brexit and, in the process, simplify trade procedures and reduce the cost of doing business. The push for a free trade agreement (FTA) with the GCC, however, represents another point of uncertainty. Negotiations over an FTA promise to be a complex and drawn-out matter, as demonstrated by past multilateral attempts. The EU has been unable to reach an FTA with the GCC despite negotiations going back to 1988. The continuation of the intra-GCC crisis stands to make matters even more complicated. Individual, bilateral trade agreements do not necessarily form a viable alternative avenue for the UK. At a panel at the World Government Summit in Dubai, Emirati Minister of Economy Sultan bin al-Mansouri noted that “such agreements can take years to negotiate.” [21]

The political uncertainty surrounding the exact nature – and finality – of Britain’s exit means that long-term economic implications remain unclear. Nevertheless, even in the case of a no-deal Brexit, the UK will be forced to re-establish itself as an independent actor in the global market. In doing so, it faces considerable competition, including from the world’s largest trading bloc of which it had previously been a member. Any new trade agreements, as such, will be likely be measured by Gulf states against another willing interlocutor.

Grace Wermenbol specializes in the contemporary geopolitics of the MENA region. She holds a Ph.D. and MA from Oxford University (UK), where she also held teaching and research positions. Dr. Wermenbol regularly contributes to international media outlets and think tanks, and she is currently in the process of writing an academic monograph with Cambridge University Press. She currently serves as a Non-Resident Scholar at the Middle East Institute in Washington DC.

[13]Debusmann Jr,Bernd. “How the UK is doubling down on GCC as a key economic partner”.Arabian Business.March 30,2018.

[18] “Doing business in the United Arab Emirates: UAE trade and export guide”.Department for International Trade. May 01,2018.