“King, we’re losing our ass defending you, King, and you have a lot of money.” Such are allegedly the terms exchanged in a  recent phone call between President Trump and King Salman, or at least this is what the President of the US was selling his base at a rally in Wisconsin on April 27 – where he was also happy to report that “We defend them. We subsidize Saudi Arabia; they have nothing but cash” [1]. Moving beyond the surprise that such undiplomatic statements might still stir, it is important to analyze them in light of ongoing tensions between President Trump and a significant part of the US population as well as of Congress regarding the nature and the extent of the relation between the U.S. and Saudi Arabia.[2] [3] Against the backdrop of the murder of Jamal Khashoggi and the Yemen war (which is now qualified by the UN as ‘humanity’s greatest preventable disaster’), it has become increasingly difficult for the US head of state to justify what is perceived as a free pass to sometimes erratic and unreasonable Saudi policies, and more broadly to keep defending the relevance and importance of maintaining arms exports not only to the Kingdom, but also to the United Arab Emirates (UAE) and, to a lesser extent, Qatar.[4] 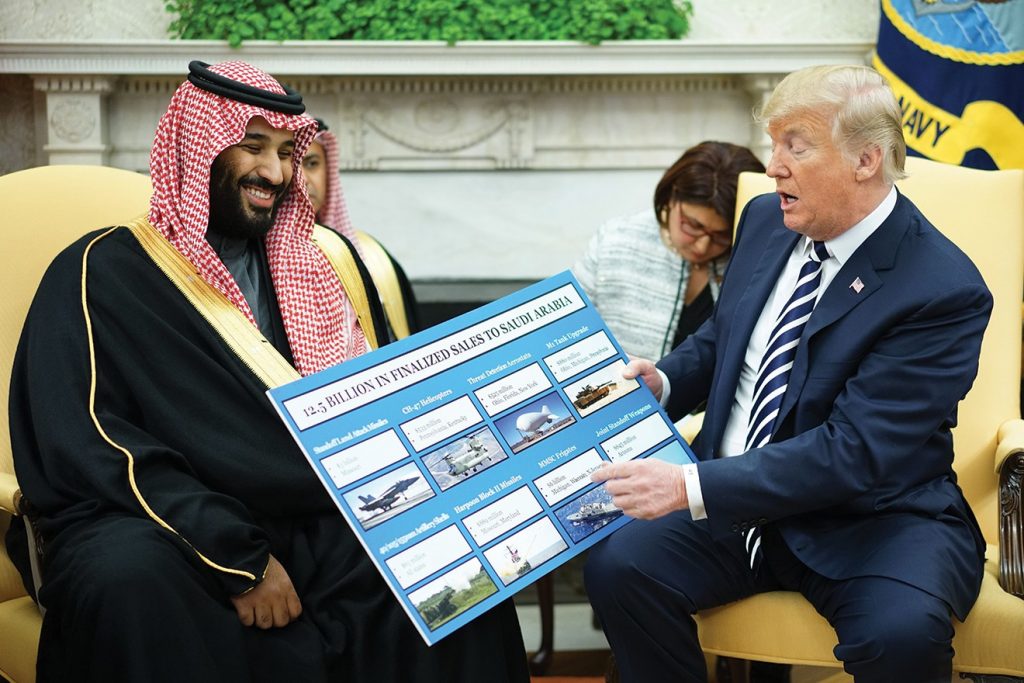 In this context, one half-decent possible explanation for these recent declarations is that President Trump wants and needs to give an impression of control. In a manner which is quite similar to the way he shoveled numbers in the face of Prince Mohammed bin Salman (MBS) during his visit back in March 2018, Donald Trump indeed seems eager to show who’s the boss, and to prove how much the US arms trade remains an effective instrument of power and influence, including (and perhaps most importantly) in the Gulf, against the background of undying outcry against such exports.[5] Despite these displays, however, it is important to highlight how trends of US-made weapon sales to countries of the Arabian Peninsula over the last decades have evolved along lines which tend to point to an increasing amount of power and influence in the hands of client states.

The days when US defense companies sold obsolete arms which were about to be taken off the market, such as the Hawk missiles purchased by the UAE in 1989, are over. In an attempt at meeting wider ambitions and clearer capability needs expressed by their Gulf clients, aerospace companies have sometimes exported versions of military equipment to the Gulf that are even more advanced than those possessed by the US armed forces – such as is the case of the F-16 E/F Block 60s sold to the UAE in the early 2000s.[6] In addition to this adaptation of technical specificities to match mounting demands on the part of the Gulf monarchies, it is worth underlining that the US State Department has had a tendency to okay some arms sales to the region which would probably not have previously gone through. A good illustration of this is to be found in the export of the Terminal High Altitude Aerial Defense (THAAD) to the UAE approved in 2012, making it the first international customer to procure this system, and to Saudi Arabia in 2017.[7] [8] Finally, it is important to mention the next frontier, which is the increasing inclusion of domestic logistic chains as well as transfers of knowledge and technologies in military contracts signed with Gulf partners. As part of an effort to build a local defense industry which would help these states become less dependent on outside powers security-wise and on oil economy-wise, the UAE and, following in their footsteps, Saudi Arabia has indeed had mounting offsets demands in this regard.[9] [10]

These evolving trends of US-made weapon sales to Gulf countries can be attributed to a number of factors, one of which is, of course, the shifting regional threat and the will to protect the Arabian Peninsula from ballistic missiles which could hypothetically be launched by Iran or some of its allies closer to home, such as the Houthis.[11] [12] Regardless of the credibility of this hazard, it is important to point out that this is a necessary yet insufficient condition. Another critical circumstance is what can only be a tacit green light from Israel, amidst a context of an unspoken – although increasingly public – alliance against the common Iranian enemy.[13] For instance, the UAE could become the first Middle Eastern country after Israel to get the F35, which the US happens to have recently deployed in the country, and after there were talks last year of a UAE delegation visiting Israel to study the 5th generation aircraft – although this was denied by Tel Aviv.[14] [15] Finally, the sharper competition for Gulf arms markets plays a vital role, particularly when it comes to Russia and China.[16] Interestingly enough, the announcement stating that the US State Department approved the possible sale of a THAAD system to Saudi Arabia came one day after the Kingdom had agreed to buy Russian S-400 surface-to-air missile systems.[17] Today, much similarly, the efforts of the Trump administration to make it easier to export US-made military drones, including to the Gulf countries, has everything to do with China becoming an armed UAV export leader.[18]

What is crucial to understand here is that while these evolving trends of US weapons exports to the Arab states of the Gulf allow them to better address the security challenges they are facing, they also contribute to broader shifts in power dynamics, inside and outside the region. One aspect of the arms trade which has always been important in the Arabian Peninsula is the political value of military contracts.[19] When they sell state-of-the-art equipment to the Gulf monarchs, the US and other major arms producers symbolically grant them a support which is very important to their internal stability as it conveys an implicit message to their population. It also dramatically improves their security by raising the strategic costs of any external attack on them, thereby preventing many belligerent yearnings, including among themselves. This has been particularly well illustrated by the significant peak in weapons imports by Qatar against the background of the crisis within the Gulf Cooperation Council since early June 2017.[20] Finally, and perhaps more crucially, the growing emphasis which is now placed by the US government on the economic utility – or vital necessity – of these arms sales is accelerating the fact that the global arms market is becoming a “buyers’ market”, thus increasing the bargaining power of Gulf clients, and critically reducing the US political sway in the process.[21] [22]

Amidst a general context of criticism of US arms exports to the Gulf monarchies (particularly Saudi Arabia and the UAE within the framework of their intervention in Yemen), some analysts suggest that suspending these exports or halting US support to them would do more harm than good – and the US State Department certainly seems to concur, judging by the fact that it just okayed $6 billion worth of new weapons sales to the Gulf. While this may rely on valid arguments, the thing policymakers in the West at least ought to acknowledge today is that these strategic choices do not only impact the power dynamics on the ground – they also affect the amount of power and influence they can claim in their own relationships with their Gulf partners, which are determined to pull their weight as new middle powers in the Middle East and far beyond.[23] [24] [25]

[1] Damian Paletta and Steven Mufson. “Trump faces string of setbacks to his efforts to intervene in the U.S. economy.”The Washington Post. May 2, 2019