This month, OPEC and its allies (commonly referred to as OPEC+) agreed to extend a previously negotiated production cut in an attempt to control the global oil supply and price. However, despite the successful extension of the oil production cut pact, this extension may not prevent oil supply, demand, and, therefore, price from being influenced by a range of factors that are new to the energy market. These variables include the emerging relevance of new suppliers and the changing direction of the energy market. In addition, the energy market now faces three new realities. First, OPEC and other major producers have been struggling since 2018 to balance the oversupplied oil market. Second, Russia (formerly considered a rival of OPEC) has become an ally, evidenced by increased collaboration between Moscow and OPEC’s de facto leader Saudi Arabia. Third, there has been a spike in oil production by non-OPEC members, mainly the United States and Canada. Subsequently, OPEC retreated from the oil market, and its influence is now inversely correlated with the advancing roles of the United States and Russia and with other factors affecting the global oil market.

There is no doubt that OPEC’s 14 members continue to exercise substantial control over the price of oil; the cartel still supplies 40% of the world’s oil needs.[1] Nonetheless, the increased production capacities of Canada, the U.S., and many other nations have gradually lessened OPEC’s ability to control the price of oil. This dwindling influence may be one of the reasons why Saudi Arabia and Russia (the de facto leader of the non-OPEC producers) have been coordinating over the production cut since 2017. This deal’s ratification was a sign that OPEC—led by Saudi Arabia, the world’s largest oil exporter—is increasingly unable to control the price of oil without coordinating with Russia. The need to improve collaboration across every energy sector was likely a factor in the improvement of Russia’s bilateral relations with the UAE and Saudi Arabia. For the latter, this improvement was expressly evidenced by increased Saudi investments in Russia’s oil and gas sectors.[2] Based on this experience, it is reasonable to assume that, in the future, the price of oil will be set through collaboration between OPEC and the other major oil producers.

Between 2017 and 2019, the output of non-OPEC oil producers jumped from 60.76 million bpd (barrel per day) to 65.66 million bpd, and this is expected to rise to 67.78 million bpd in 2020. Meanwhile, OPEC oil production between 2017 and 2019 dropped from 37.37 million bpd to 35.46 million bpd, and this trend is expected to continue through 2020.[3] Although some of this drop was voluntary (due to the production cut), some was also likely caused by the global slowdown in oil demand, and the ability of non-OPEC members (mainly the U.S.) to replace OPEC suppliers in new markets.[4] Now, the production cut, which has been to a certain degree successful at controlling the price of oil, is at risk of becoming less effective for several reasons. Chief among these are stagnating demand, the desire for cleaner sources of energy, and the production surge among non-OPEC members.

In addition, intentional production limitations have not been able to counteract the effects of geopolitical factors on oil prices. For example, the main factor responsible for the increase in the price of oil during 2018 and 2019 was not production cuts but the reinstatement of U.S. sanctions on Iran’s oil sector (and subsequent events such as the attacks on oil tankers in the Strait of Hormuz). This became clear when the market remained oversupplied even though OPEC reduced exports, and the price of oil has mostly remained under $70 since January 2019.

At the same time, though OPEC removed 1.2 million bpd from the market, the U.S. managed to increase its production by nearly 1 million bpd over the same period, another sign that OPEC’s power to control the price of oil is diminishing.[5] Also, Saudi Arabia, Iraq, and the UAE were able to keep their export numbers high in part because the oil exports from two major producers (Iran and Venezuela) were removed from the market as a result of U.S. sanctions. This shows that the market had not been significantly impacted by the elimination of two of the world’s top oil producers since it had been oversupplied since 2018.

Despite their recent collaboration, Saudi-Russian partnership is not guaranteed to persist due to disagreements over what constitutes a fair price for oil. While most OPEC members want to see oil prices no lower than $75–80 per barrel, Russian President Vladimir Putin expressed disagreement in a recent statement, indicating that a fair price for Russia was somewhere around $65 per barrel.[6] In addition, the U.S. continues to exert downward pressure on the price of oil as it slashes its imports from OPEC members while increasing domestic oil production and importing more oil from Canada and other non-OPEC producers. The chart below displays the trends in U.S. oil imports since January 2017 (data sourced from U.S. Energy Information Administration).[7] 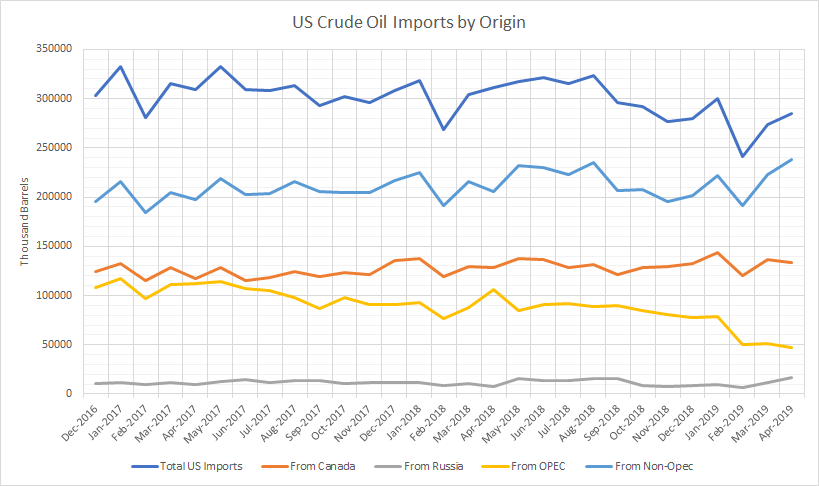 The future of OPEC, in which it must rely on agreements with other major oil producers, shows that the oil cartel can no longer efficiently achieve the original goal that justified its establishment. At the same time, with the U.S. as the world’s largest oil producer, its growing output will probably increase its capacity to export oil, petrochemicals, and LNG. In turn, this could push the Saudis and the Russians to liaise with Washington if the U.S. decides to continue growing its production capacity. Given recent increases in investments in the United States’ energy and petrochemical sectors, this appears to be the direction that the American economy is taking.